Almost a month in the bush. It’s a continuous roller coaster with its ups and downs, in a way it mirrors the shape of the mountains I travel on. When it’s uphill, chances are that I’m having a bad time. But recently it hasn’t been true. I’ve found myself enjoying some of the tough climbing. If my energy levels are good, I feel I’m making good progress and I can keep a momentum, then I might even enjoy it.

I realise it has a lot to do with my health. A sick stomach or an aching knee, is is all it takes to put you down mentally.
In the end this is not that different from a 9-5 office job. The difference lies in the fact that every single day is completely different and an adventure on its own. In this adventure, I’m the master and commander. There is no one to blame but me. There is no one to congratulate me but myself. I’m the only reason things are happening the way they are. Whether there is a storm or it’s clear blue sky, I keep on sailing in the direction I chose.

Having spent some time with a family that is in the farming business, I feel enriched. I’ve learned a lot about farming but also about bush fire fighting thanks to their son Aaron. For the last five days I haven’t stopped talking and yesterday was not an exception. Everywhere I go there is going to be someone to ask me questions, even maybe take pictures. I get some useful local knowledge and often some food or even bike parts.

This morning, at the house, we are all having breakfast together around the table. Something that has not happened to me for an eternity. What a pleasant thing to do to share this moment together before going to our errands, jobs or bike rides.
Suddenly, Russell (the owner of the farm and father of two boys) stand up and runs outside while putting his boots on. Turns out one of the horses kicked another one over the fence and it landed on its head. The other side of the fence is the paddock of a stallion which starts to wonder what is happening and chases the poor horse who didn’t want to be there in the first place. It gets back on its legs, chocked. Russell and Aaron separate them and put the horse back in its paddock. It has some bruises and cuts but no serious damage.
A morning breakfast at a farm can be nothing but boring! Aaron has to go to work. He works in the summer as a firefighter but also does computer animations, two very different worlds. He wishes he had something right in between that could suit him.
Aaron is envious and would like to join me on the trip rather than going fighting bush fires today. He is one of the rare people I’ve met who have an accurate understanding of what it means to push heavy gear up a mountain. In his work he carries chainsaws through the bush to clear paths and prevent the fire progression. His description of the effort and concentration involved matches with what I have been experiencing many times these past weeks.
Later in the morning I pick up my food parcel. Once again I hate the process of packing up the food in my bike panniers. I build up an anxiety about the weight and the space it’s taking. I know I will have to push that to 1,700m above sea level in a couple of days when I reach the highest point on the Bicentennial National Trail.  I already know how much suffering this food will cost me. Once again I have too much of it but I’m reluctant to send it back or throw it away. None of that will make me feel good. I’ll just carry this and suck it up.
The day is boring, I’m riding on sealed roads to avoid some hills. The road follows the power lines and is a straight line. I don’t have far to go, but just like a mate, I overshoot the campsite by 3kms. I backtrack and find it. I need some water and I need some rest in a good location.
It’s all pretty dry around here and someday I worry the creek will dry out.

Approaching the campsite I can hear the noise the creeks makes. It’s the noise of abundance, a sweet feeling. Water is such a pleasant ingredient of our life. And when you are out there in the bush, even in the cold weather, a good water source makes things better.

Today was not enjoyable. My stomach is aching and my bike is vibrating. For the last one it could be just a little bit of sand in the chain, but any different sounds are to be noticed and fixed. There is no place for luck here. I certainly do not wish to push a bike for the next 200kms.
As for my stomach, it has its ups and downs, it is cycling. Maybe I’m getting used to the conditions and the lack of hygiene. Or it might be a bacteria I’ve been carrying prior to the trip. I knew I wasn’t perfectly healthy when I left, but it was time to go, it was now or never. I had to take a leap of faith. I got sick, I got injured, I was in pain, but if it’s not one thing it would be another one. I’ve been very lucky with the weather, my bike is still in one piece, and I could not list all the good things that have happened to me. 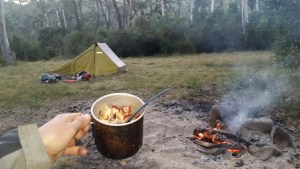 Tonight I realise that arriving at a campsite early makes a huge difference. I’ve been pushing a lot recently, riding late. Things take time, especially setting up a campsite and taking the time to relax. This is a good learning experience and something to repeat once my nasty hill demons are upon me.

I’ve got another 1,000m elevation gain tomorrow. I fear it. Bad memories come back.

I wouldn’t have had the energy to go over the top of the hill if it was today. Tomorrow can be a good day and maybe it won’t be that bad, maybe it could even be a pleasant experience as long as my body is on board and behaves itself (same goes for the bike!) 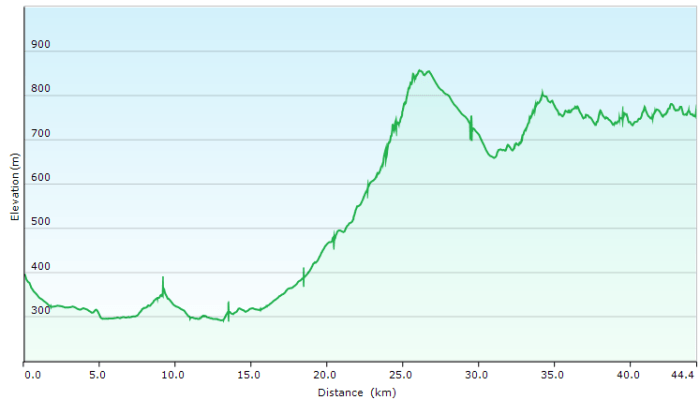