I stayed up late last night so that I could update the blog. I take pride in doing it. Even if nobody was reading it, it would still very valuable for myself. Each day is a different adventure, a different challenge. It helps me remember and feel what I felt at a specific time or place.
This morning I’m waking up in a house and my host is soon awake and in suit. I’m still trying to adapt to the noise and complexity of the city lifestyle. A sort of stress grows in me. Not something I can put a finger on, but rather an underlying sensation that I’m aware of, because it contrasts with my more quiet and peaceful state of mind. Although being in the bush is challenging, it does not make me tense, its just different.
The packing is annoying. There is the food I bought, the new tent to try and repack, the Internet errands, and phone calls I should make. I really don’t enjoy talking to people on the phone, I find it so much better to talk face to face. Speaking of which – I usually smile at people and wave at people. I tried that in Canberra but I didn’t get much of a response. Once I leave the house, I have one goal: to get as far from the city as possible. 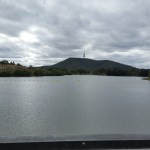 Travelling north not far from the city centre. Canberra has a lot of Rivera, parks, cycling ways. 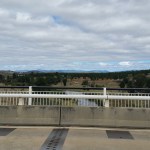 On the other side, facing away from the city. Endless Hills 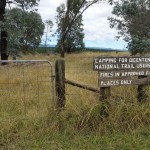 The BNT campsite near the heart of the city 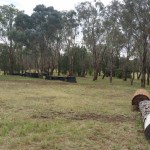 Obstacles part of the public horse club. Very good equipment that anyone can use

Later in the day, once I’m back in the countryside, everything is back to normal. People start noticing me. Life as usual. I even have a 15 minute chat with a nice guy on a mountainbike. We were riding in the same direction and he asked me some questions about my trip. I spent the next few kilometres riding next to him and talking non stop. He said he was impressed and told me which way to go. I love bike riding talk.
Canberra is quite spread out, it does not have a high population density, but it takes a long time to leave the last suburb. Today I get better at finding the best bike lanes though. There are two types, the ones on the side of the road, and the ones completely separate. The latter are the better.
I pay a visit to the Bicentennial National Trail campsite near the city centre. For horses it makes sense to use this facility but for people on bike, there are plenty of options.
There are two things that I don’t want to do today but I should do. One is to call my tent retailer – I haven’t received news for a while and I need to see if it’s going to get fixed. Turns out my contact hurt his neck and is off work, but he left a message for me. Something to follow up. The other thing that annoys me is to have to call the local district to ask permission to camp at the TSR (travelling stock routes). I feel it’s overkill because I never know in advance which camp I will reach.
The section of the trail I’m on now is flat and I progress a lot faster than horses. Until its almost three, I still don’t know if I want to stop or push on. That is a big advantage I got on the bike.
Tonight I have decided to stay in Gundaroo. I was was hesitant, but I realised it has top facilities with hot showers, barbecues, and a pub. Also, the camping area is managed by locals and it’s free, you just make a donation.
I need to catch up on sleep and this is a good opportunity. I’m curious to see if the cheap tent will do the job.
The next town is in 90kms, I’ll cover as much as possible tomorrow to get to a more interesting place, but also because I just can’t wait to be in Manly, my former home, North of Sydney. Time for a snorkel and good time with old friends. I haven’t been there for 6 months and there are some of my friends I haven’t seen for two years.

2 thoughts on “The 10th of April – Canberra to Gundaroo”