When I’m leaving the campsite today, I know I’m going to have to work hard and suffer physically and mentally. I don’t know how bad it will be but I’m prepared for the worst. I think it’s better to be prepared than to expect an easy day and be caught by surprise.
I leave the highway, and head for the Connors range. The 30 year old guidebook is trying its best to explain the challenge ahead, but it does it north to south. It talks about a steep climb that can be done in two hours by horse. It has bitumen on the last 2km and a steep unmaintained track downhill on the other side of the Connors range. Translating south to north that means it will be a nearly impossible climb on an existing track pushing a 50kg bike.
As I approach the bottom of the range, I have good news and bad news. The good news is that unlike yesterday I can see the track, so I don’t have to worry too much about navigation. It’s a lot less stressful. One does not want to get lost while going up a massive hill, that is just too much to handle mentally, nerves would break. The bad news is that not only is it steep climb, but it’s a bad surface covered in lantana weed, up to my chin and above. I use the bike as a shield, letting it get hit by the branches and pushing away the lantana. I keep a low profile with my face behind the handlebars. Surprisingly it works and I progress. 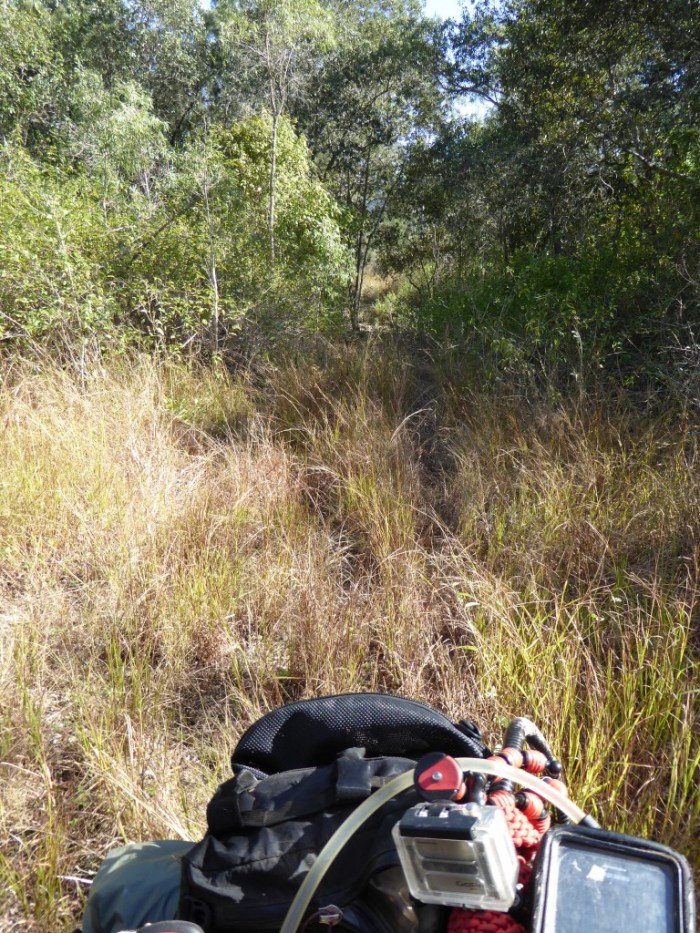 One dry creek gives me some grief though, I have to get in front of the bike, take it by the handlebars and pull it towards me to get out of the creek bed. I take a look at the contours on the GPS. It’s a 400m extremely steep climb ahead, but I tackle it. I know that stuff. I know I can handle a mountain three times the height since I went across Victoria on the BNT. It’s about baby steps. If I can put one foot in front of the other, it’s a step closer to winning the game. The rocks slow me down. There is no hope pushing the bike over them while keeping the momentum, every stone has to be tackled one by one. I‘m stepping and pushing on the handlebars, and pulling the seat post while lifting it up to get over the rocks. Next step is to press the break to secure the bike, next I step forward. Then the bike. And again and again. At times I rest my head on the handlebars and have a micro sleep, half conscious, half dreaming. Physical exercise does lead to emptying my brain at that level. Extremely tired, looking ahead, up, step by step

Not much thought allowed, no space for anger, happiness or sadness. Just the hope, just one more step and then another one. Over and over again. One thing I must not forget though is to eat, constantly. I swallow anything I can find in my lunchbox, anything easy to access. Stopping eating is stopping period. My body can’t function without high energy intake. I focus on something, and daydream a little to make it easier, but not too much.
When I stop to rest, I wonder why I’m not going again already. I wonder what is going to be the trigger in my slow brain to move my body again, what do I need. Eventually I realise I don’t have the motivation, moving my body and this bike is just pure effort. So I stop asking myself questions and I go, so that it’s over sooner. 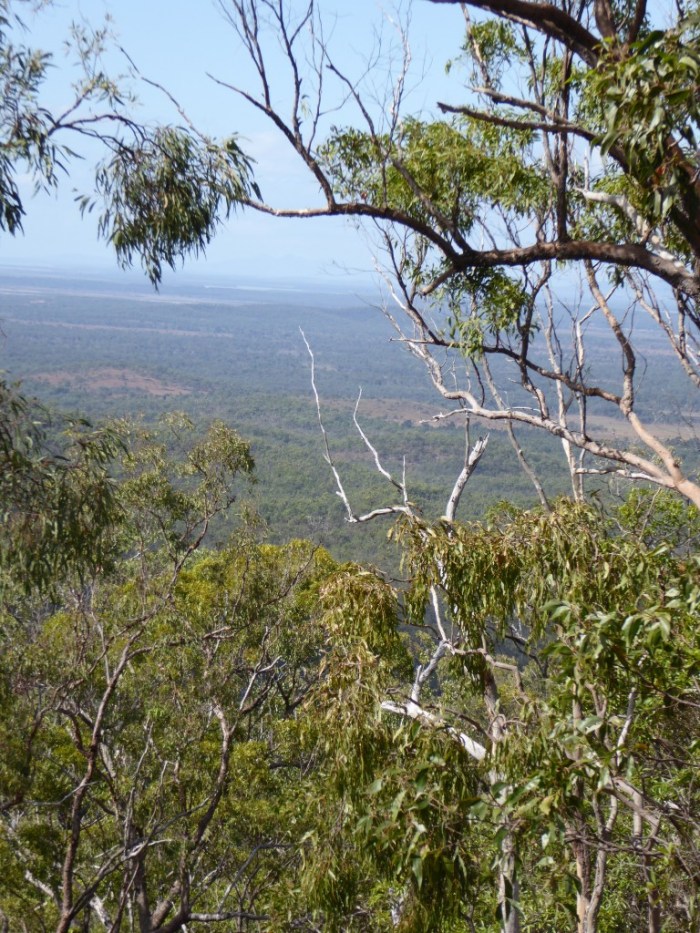 This is where I come from 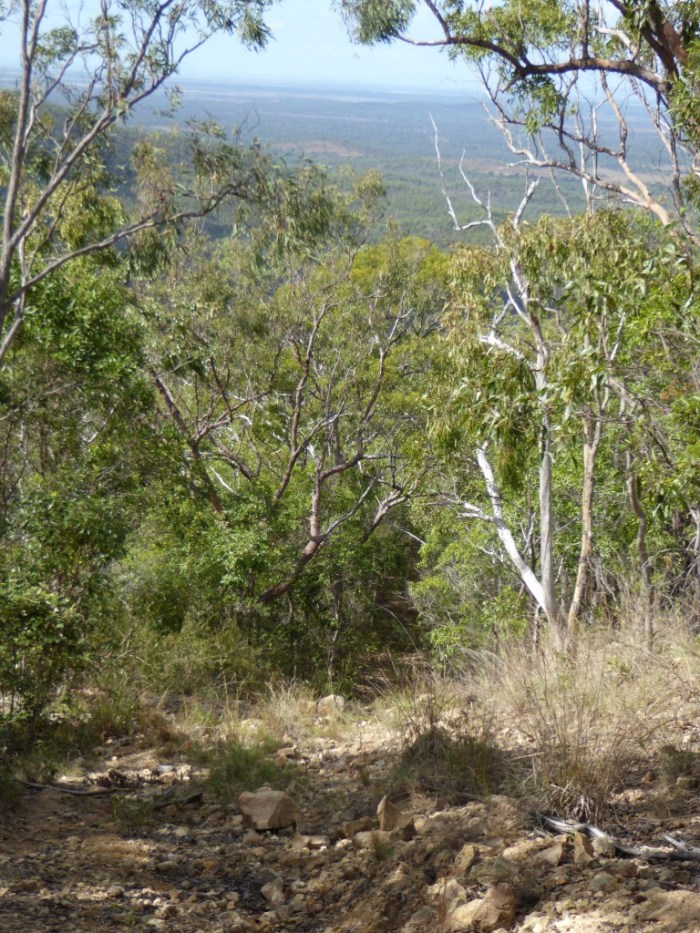 Bad track all the way to the top

Eventually the track becomes less steep, I can almost keep the bike and myself moving with some momentum. At the top of the range, I’m ready for more undulations, it’s never over. A range does not let you breathe until you have left it.
It is peaceful up here. The horses look at me, I look at them, and I continue. Pushing the bike on the grassy land, scaring away yet another herd of cattle. 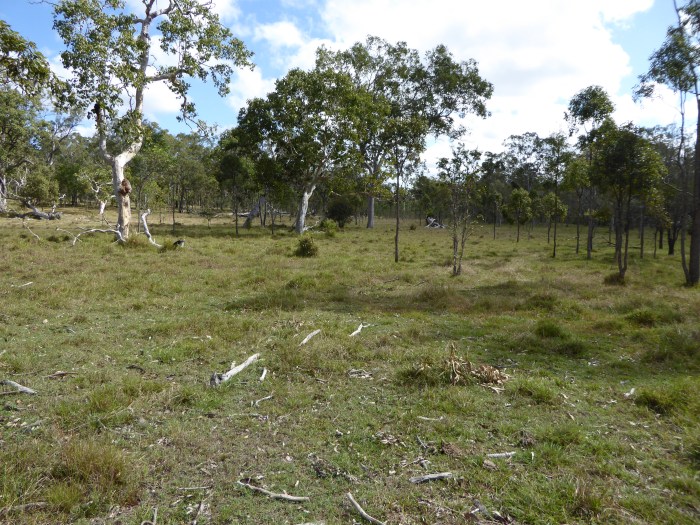 Grassy on top of the range

I find the gravel road, and get on my bike. It’s half a battle won. I do not wish to leave this road. It’s not the best one, but it’s mine, it is safe and can be conquered. It won’t get me lost, it will get me somewhere.
It undulates a bit, and I still have some energy left. I can thank myself for eating all the way up. I finally get to the bitumen, which leads me down the range fairly quickly, losing 200m elevation in a matter of seconds. It took me two hours to conquer them. 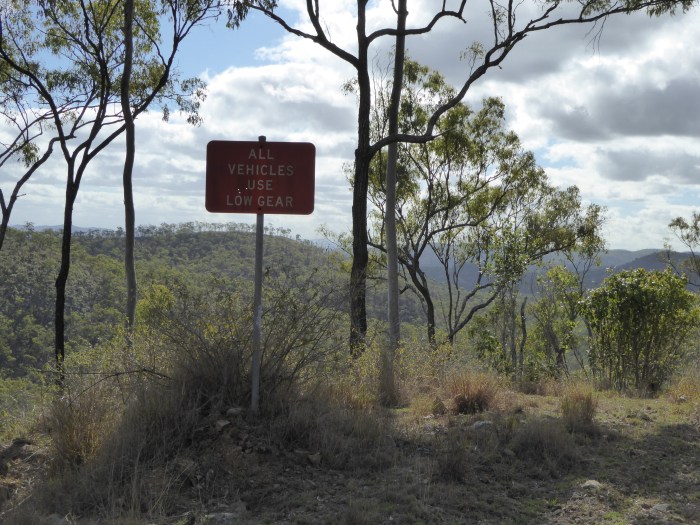 Going down the range on the other side

The road now swings in the valley, along the dry creek. There’s more cattle on the road, as always they run in front of me, they don’t just stop and let me pass.
Once it gets to 2pm, it’s lunch time. I force myself to stop or else this lunch will never happen and I risk hitting the wall. I mix pear, wrap, Nutella, condensed milk, an explosive recipe that is proven to work with me.
Looking at the map, I try to find my goal for today. I needed to ride 70km in order to get to Mackay tomorrow night, but I’ve done only 30km and it took so much of my energy. A goal is hard to give up without affecting my morale badly.
The road is now very good, slightly going downhill. Enough to allow me to ride almost 20km an hour.
The next challenge arises. I’m getting low on water and most creeks are dry. I see a farm on the way and hesitate to stop and get water from their water tank. I decide to wait last minute as refilling will take quite some time and I want to go as far as I can while I’m still able to. Before it’s dark though, water level is getting critical and I’m thirsty. I find a water tank and refill 1L that I plan on treating after if I really need to. 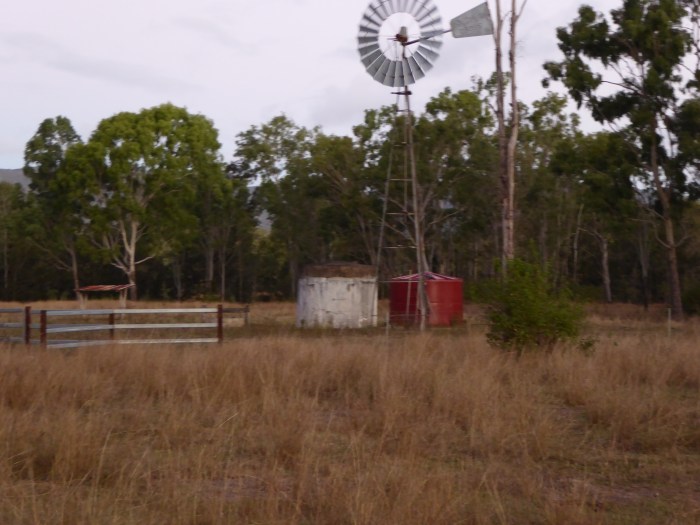 Windmill and water tank are my backup. Often cleaner than creek water

I go through many dry creeks, the little water left here and there doesn’t look great. When it’s finally almost dark, I’m at Tierrawomba homestead. I say hello to the men near the paddock. No response. I realise that they are too busy trying to catch a cow or a bull to load it on the truck. It’s dark they and they probably have to get this done today. No time to talk for them.

Fortunately the gravel road becomes bitumen road. That allows me to ride in the dark using my head torch. I can usually trust the surface, except where it crosses creeks.
It’s now past 6pm, and I’m heading West towards a wider road, Marlborough to Sarina road. There is no point stopping anymore. I might as well continue. I know I will be able to rest soon in Mackay. It gets actually quite enjoyable to ride in the dark except for the black cattle whose eyes glow in the dark, like two floating dots, staring at me.
I had spotted a campsite by the side of the road earlier on thanks to an app. I’m hoping that like yesterday it will be a busy campsite with a few caravans. Usually I get offered food or drinks. Unfortunately 8km later, there’s no one at the campsite. It is not a very exciting place in the dark but the creek is not dry. Plenty of water that I can barely see thanks to my head torch. There are some bins, a lost cow, a dead kangaroo on the road and some water. I consider riding on to Sarina, it will be four more hours, finishing at midnight. I quickly give up that idea and become reasonable. This will be camp at last. I’ve done 115km, 11 hours, a climb over a range, and spent hours being thirsty. It’s time to rest after a quick dinner. Tomorrow I will still have a long way to go to Mackay. I’m thinking about how little I like sleeping in the campsite alone. I needed to get some water but the true reason I kept going is that I was hoping to meet someone somewhere and have a yarn. Being alone is getting more and more difficult to handle.