For the first time, today I wake up with very heavy legs and fatigue. I’m slow to cook breakfast, to pack up, and even just moving around the campsite. My throat is a little sore too from being thirsty yesterday. 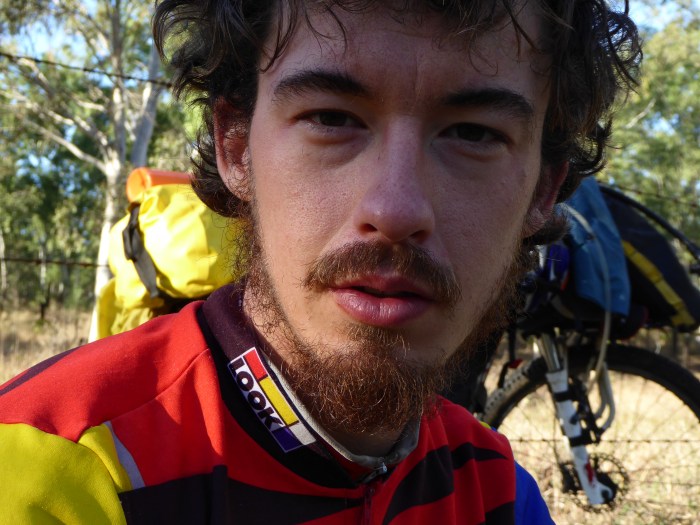 Not feeling that well

I’ve been hearing many trucks passing by on the road since early this morning. They are travelling back and forth from the mine. I have a feeling I should hitch a ride today. I’m heading to Mackay to spend a few days there, it’s a 95km detour from the National Trail. I’m not big on riding on bitumen anyway so I’m totally fine getting a lift to Mackay and back. This will be a first though. I’ll start to ride and see what happens.
Once on the road, it is confirmed. I haven’t recovered from yesterday and I can’t see myself riding such a long distance. It’s undulating and at this pace it will be dark when I arrive in Mackay.
A few cars drive past me and wonder what is the best way to get a lift. I’m thinking a Ute or pick up truck would be easier. Finally, I decide to take a chance, there is one coming. I raise my thumb whilst riding. It pulls over, and I ask for a lift to Sarina or Mackay. The energetic young driver answers back ‘Why the fuck not!’. A few seconds later I understand that means yes. We load up the bike and off we go.
Scotty works in the mine and has finished a 12 hour night shift at 6am and is going back home. He has to stop at his parents place and then is heading to his place, halfway between Sarina and Mackay which will bring me very close to my destination. 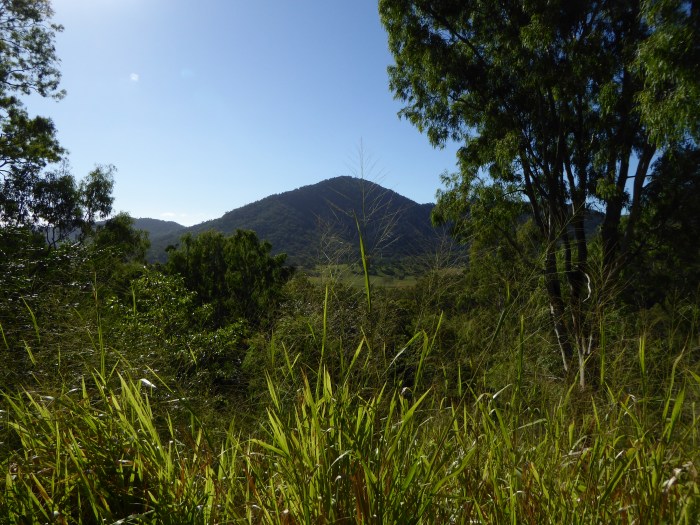 The view before we descend the range in the car. 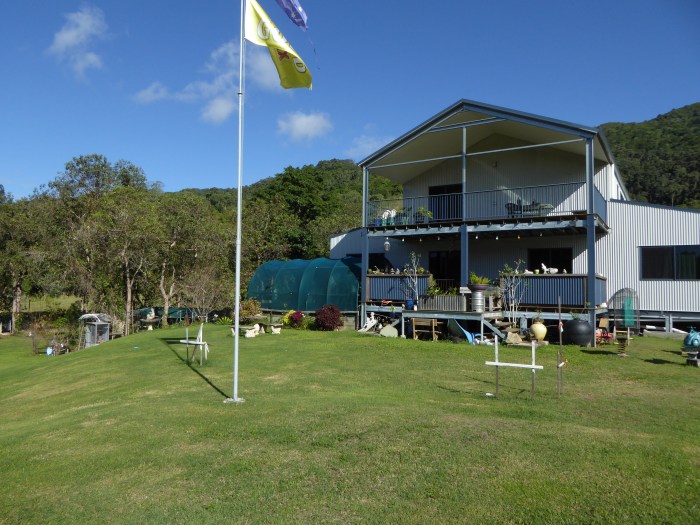 Very nice property, lot greener than on the other side of the range 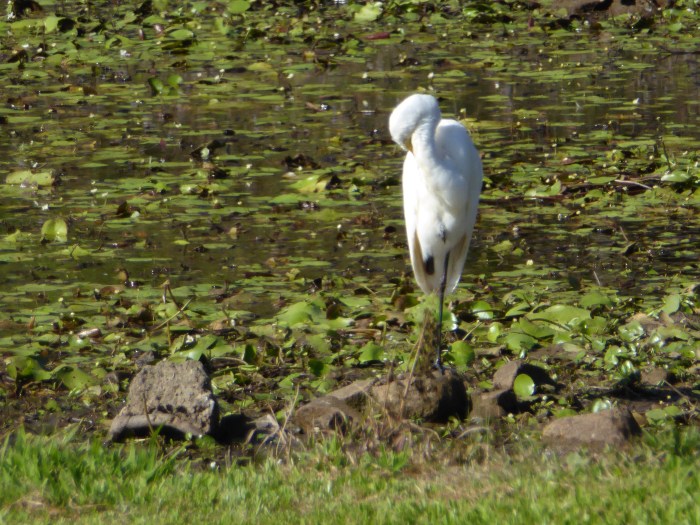 There is even a lagoon

Scotty says that if I don’t mind waiting while he does his stuff at his place, he can bring me to Mackay as he is going there anyway. This works perfectly for me.
We stop briefly at Scottie’s mother’s place, she has a gorgeous property and is growing all sorts of fruits there.
Once we get to Scotty’s place, Scottie has to take care of his dog who has been attacked by the neighbor’s dog. He sews some stitches on the poor dog. He’s never done it before but has somewhat succeeded. Cheaper than the vet he says. Scotty loves his dogs and I can see he would take good care of them. 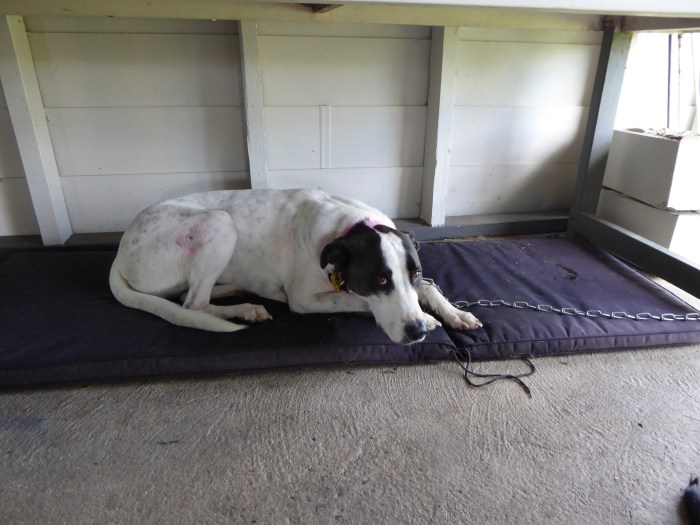 Scotty has been going along with the mining boom and making a lot of money, which is addictive. The industry is slowly going down and it will be time for him to think about new career path soon. In the mean time it has allowed him to buy a very nice property upon which he has 3 cows. 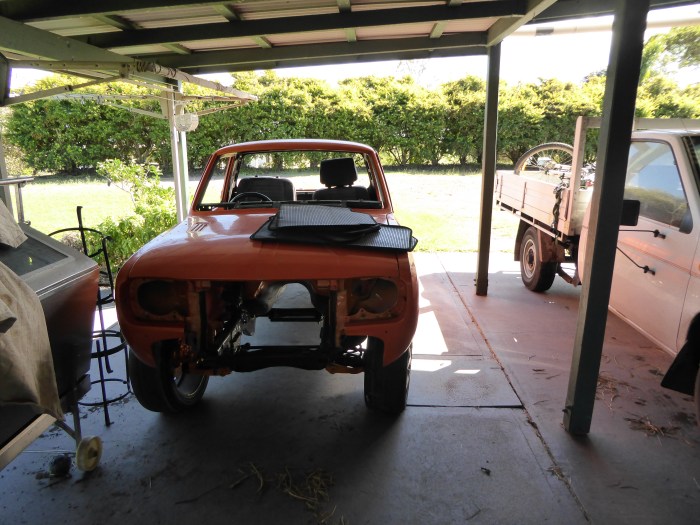 Friend working on this car 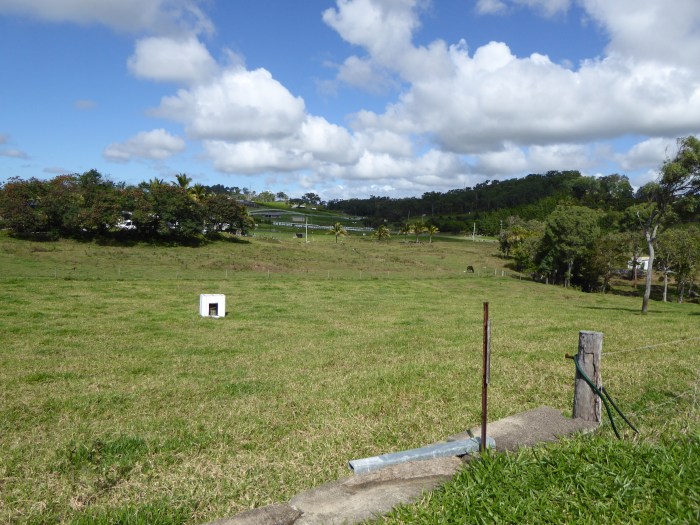 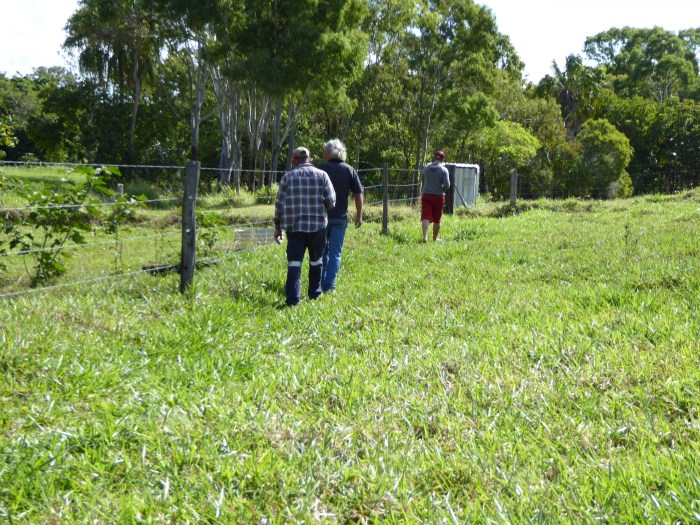 Tour of the property

The neighbours come to say hi. One of them wants Scottie’s old car. His fiancé has lost the keys so he wants to get rid of it. Scott asks if the neighbour can fix his fence in exchange for the car. We go around the property to assess the work and the deal is sealed, and celebrated with a couple of beers.

I get along with Scott. He is straight forward, has some humour and a lot of energy, even after a night shift. We talk about the importance to letting things happen without forcing them. Yesterday I felt like riding for as long as I could. I knew something good was coming. I thought it was the campsite or the water I was after. Today I’m realising I get the perfect lift that drops me all the way to the bike shop. Scott has the same attitude and feels things just happen eventually the way they should be. And if they don’t happen, they are not meant to be. It’s simple and hard at the same time for some people to let go of control.
We arrive at the bike shop in Mackay where my new derailleur has just arrived. Perfect timing again. Scott says he might be able to give me a lift back up the range on Sunday. This is even better.
At the bike shop I chat with all the mechanics. One of them knows some people I know in NSW. It’s a very pleasant time at the bike shop. I get the job done right away and they help me so that it fits in my budget.
After fixing the bike I head off to my warmshower accommodation. Warmshower is a social website for hosting travelling cyclists in exchange of some chatting and good time together. Peter is waiting for me and my bedroom is ready. 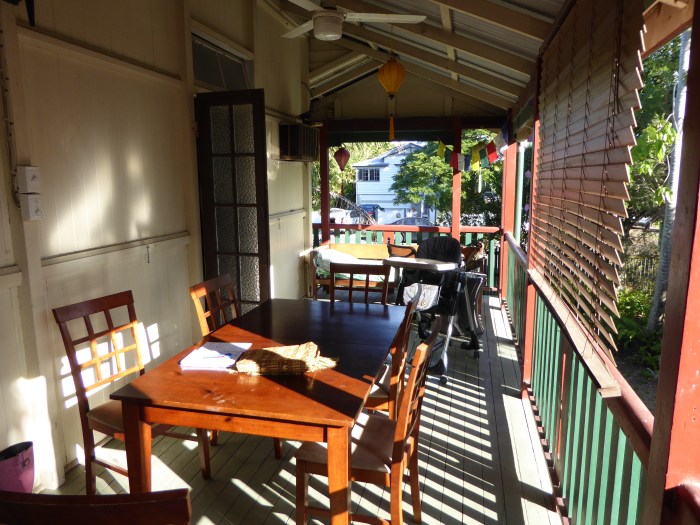 Warmshowers can give you great surprises 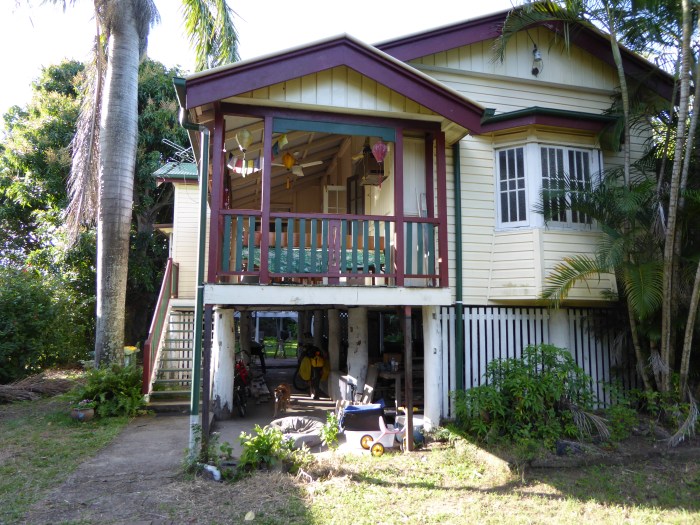 Things have been working as smoothly as clockwork today. I’ve been going with the flow from one place to another without making any effort. I got a shelter for tonight, my bike is fixed and I can rest in Mackay. I just have to find a lift to the Airport the day after to pick up Michelle and bring her to our rental accommodation for the weekend. Maybe another lift will offer itself. I hope so.