Last night I woke up in sweat. I was way too hot. I thought it was nearly wake up time, but it was only 11.30pm.
While opening up my tent to let some air flow in, I think about the route ahead.
I calculate 30km left to Zigzag station, after having done a long stretch of 110km, but the guidebooks says there are three maps left to go to Zigzag. Each map represents a day of travel by horse. Usually from one campsite with feed and after to the next. Although in this dry season, they wouldn’t have any luck with water and feed. Anyway, a horse travels between 15 and 35km a day, multiply by three, its more than 30 kilometres. I get up, open the BNT notes and realise that I have 80 kilometres to go. What a surprise, a midnight surprise. Well, I can definitely do 80km again, not a problem, 30 kilometres would have been a very short day on those fairly flat dirt and bitumen road. 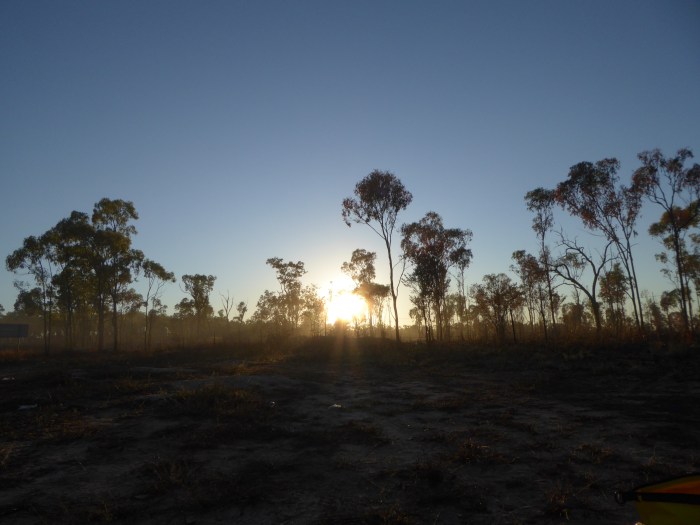 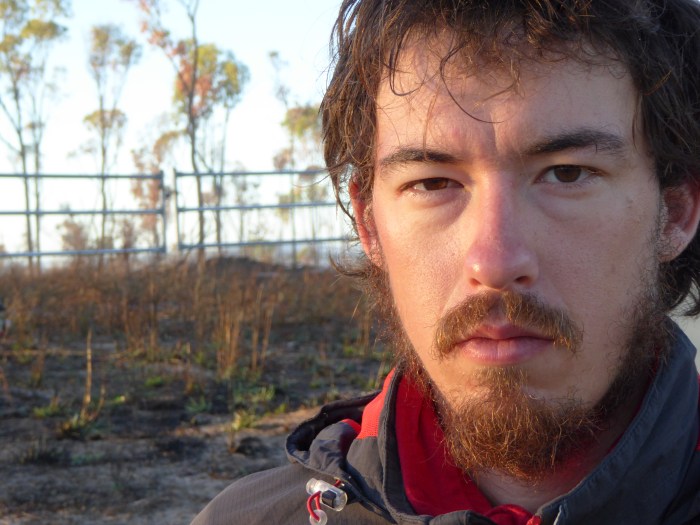 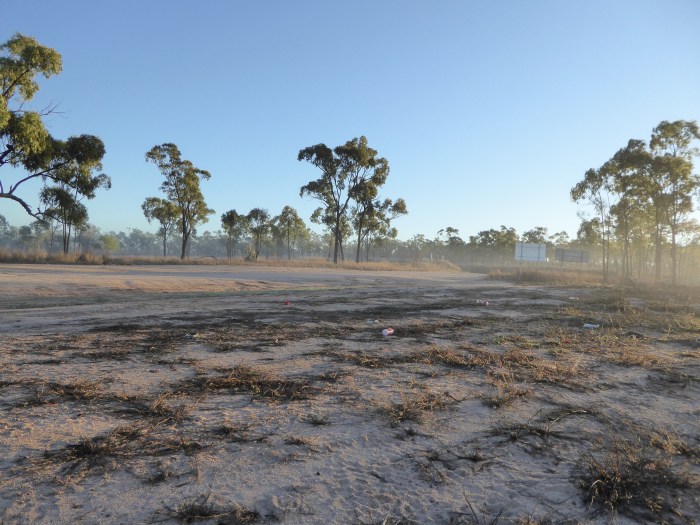 not the best campsite, dirty 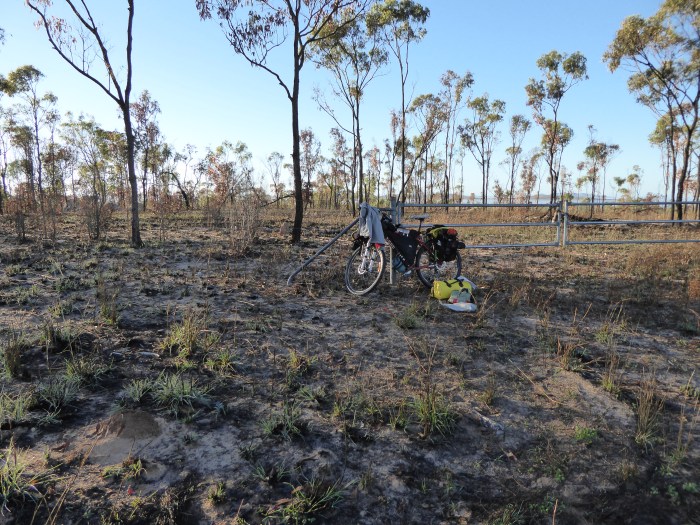 After sunrise, I head off. The dirt road is behind me and now I’m tracking the bitumen road. Helen from the Zigzag station has warned me about the hauling trucks. There are a few but not too many. I pull over when they pass me in curves with little visibility. That keeps me safe and they are happy they don’t have to slow down. 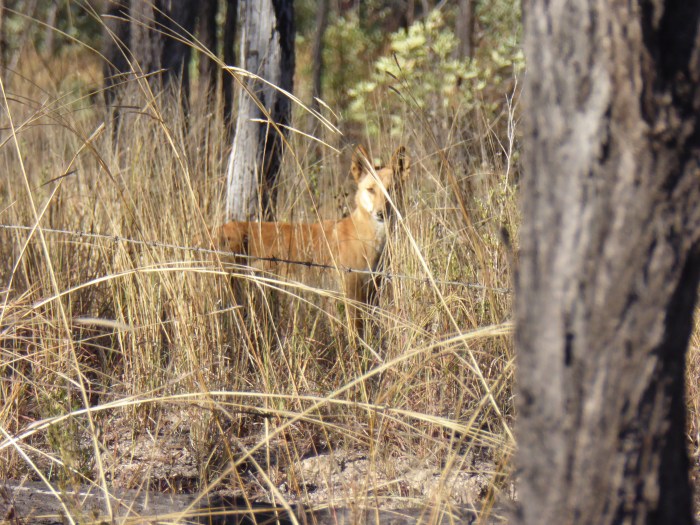 a dingo again, they are pretty shy. We looked at each other for a while 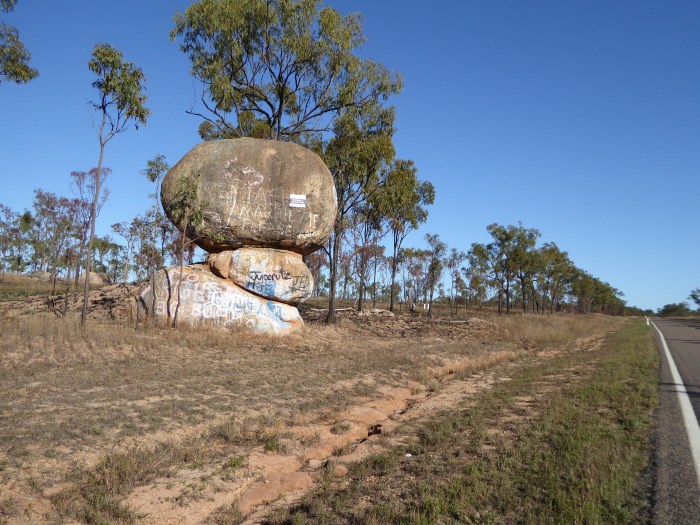 interesting rock formation by the side of the road

On the way I’m looking everywhere for the two girls travelling on foot the opposite direction. I look to the left, to the right, I even ask some farmers. Nothing. I was so excited to meet them and had planned my days accordingly. Meeting two girls trekking does not happen everyday. In fact they would be the fourth group of BNT trekkers since the start, four months ago. The BNT is not a very busy trail.
I ring my tiny bike bell. Maybe I’ve gone past then when they were hiding in the bush for a wee. Having travelled on a fenced road I should not have missed them though.
Anyway that is how much I’ve obsessed about them. Anything or anyone new is exciting to me.
After Star river I take the run off. Another bitumen road, a little bit more quiet. Looks like a new road too. Clearly the BNT use to take some old dirt roads. This new road is easy going. Some trucks honk at me. Helen has warned them on the radio I would be around. It’s nice to be noticed.
In the morning a car stops with a lady and a little girl. They give me two mandarins and keep going their way. Not many words were exchanged but I scored two mandarins. That is gold to me. A fresh juicy fruit. In this hot and dry weather, it’s perfect. I crave for them all day long. I tried to carry some fruit with me, but the last supermarket was days ago and I’m eating my last banana today. 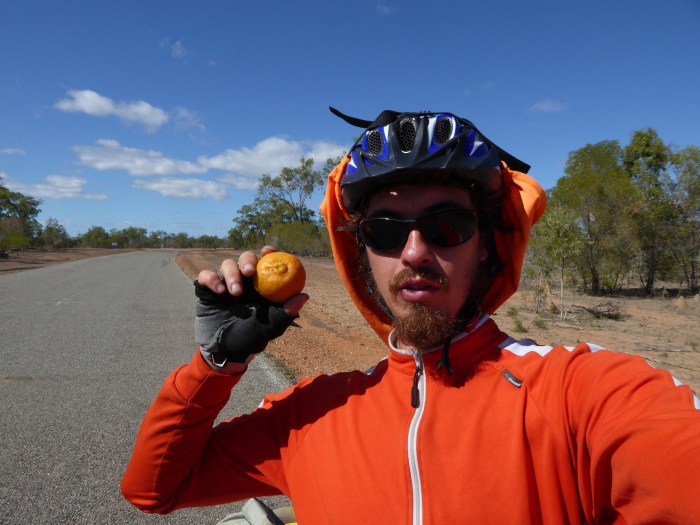 this is gold, a mandarin. A fresh fruit. Nothing beats a citrus 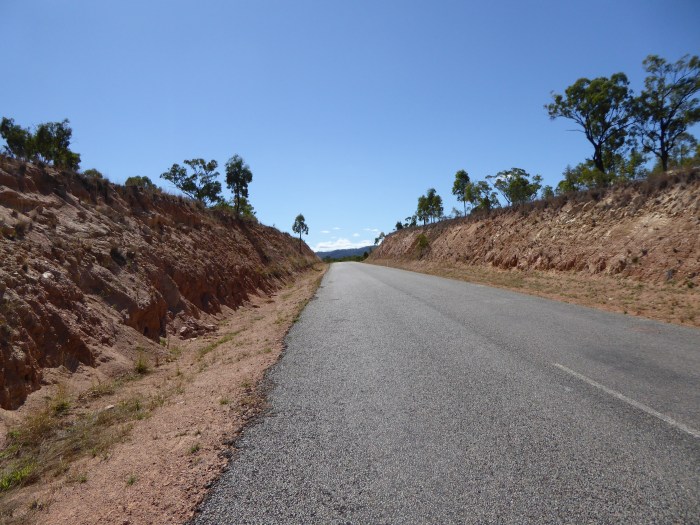 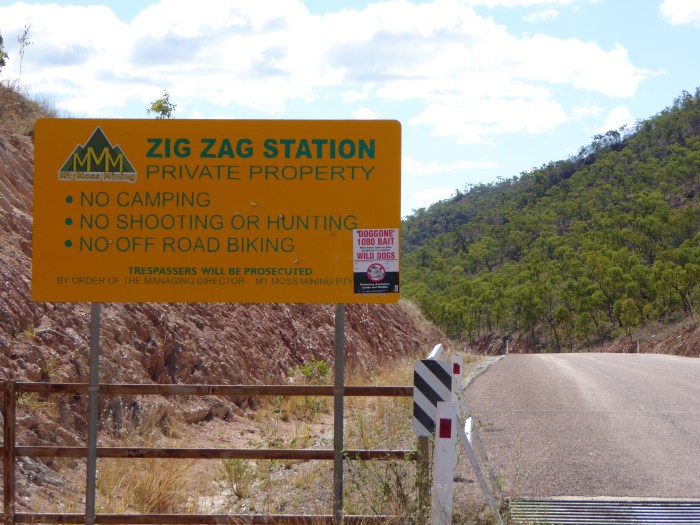 almost there. ZigZag station is my destination for the day 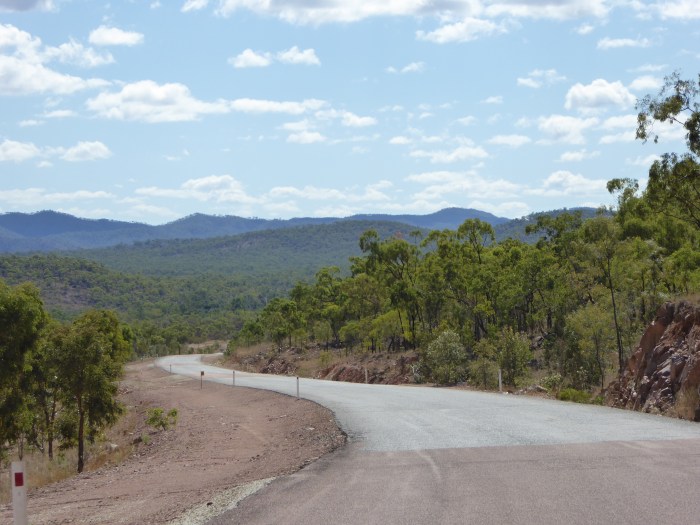 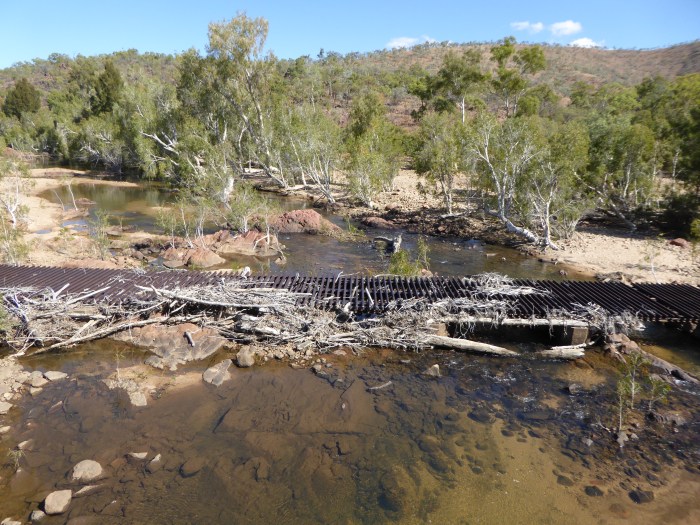 crossing running river. It is actually running, a pleasant thing in this dry country

After crossing Running river, a car pulls over. It is Helen. A hat on, cigarette in hand, and a puppy on the passenger seat. She welcomes me and asks me what beverage I want upon arrival. I think about beer, but that would put me down. So I ask for a coke just like I would at the counter of a bar. Too easy. She mentions the house is not far anymore. I keep pedalling, get to the top of the hill for the turn off on the dit road to the station. That is when I run out of water. I have used seven litres of water, for drinking and cooking, in two days. I’ve been very careful, and if I had climbed bigger hills, I would have run out way before that. Water can be an issue around here, that is why I travel fast in this country.
At Helen’s property I get a bedroom, shower, washing machine: the lot. She can host 27 people here. The station belongs to the mining company that is occupying the mines not far from here. They have also many other businesses in civil engineering and freight. They have mines in Papa New Guinea, where Helen has been many times. I envy her. The mine is slow though, iron price has fallen. I find out that the entire road to the property was built by the mining company. What a huge price of infrastructure for a mine. 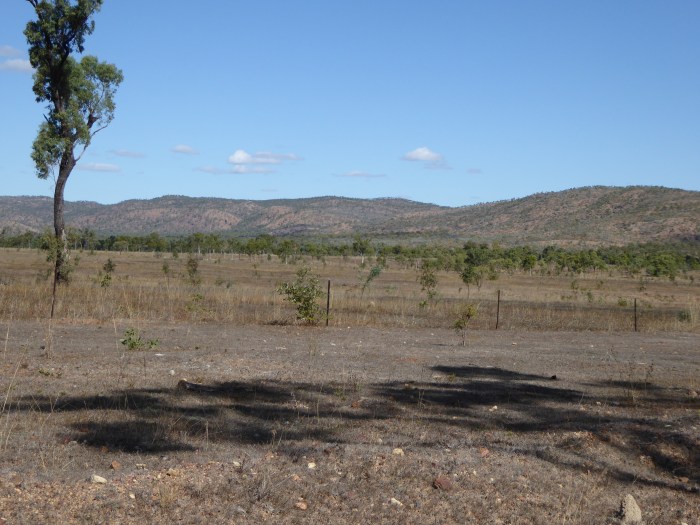 valley of the zigzag station 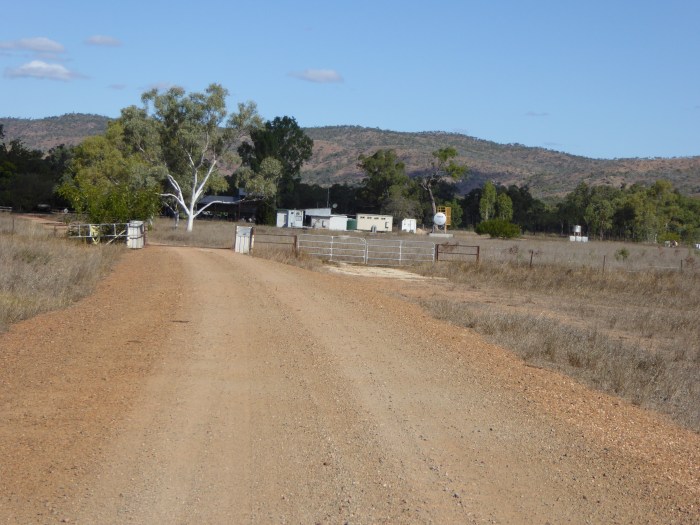 arriving at the homestead

We chat over dinner about other BNT trekkers who came pass the property, and Helen rings a few people to let them know I’m coming. We agree that some people who ride it are really not prepared for the BNT. Sometimes they get lucky and everything goes well, thanks to the support of the farmers and volunteers.
It’s hard to be prepared and look at the bigger picture while paying attention to the details for the next few days. Finding the right balance is hard at first but then it becomes a habit.
With Helen, we also talk about the danger of working at a station or at a mine. Unfortunately accidents can happen and not everything can be prevented. Fortunately helicopters can land here during day time and they are in touch with flying doctors.
I spend some time tonight organizing my extraction from the BNT in 5 days. Some Internet friends will pick me up, bring me to town, for re-supply, planning and rest. How nice of them to drive that much just for me.
Internet is here at the station thanks to Satellite. Just enough to browse the internet. I am able to spend some time with Michelle, my girlfriend, trying to contact some newspapers and magazines. We’re hoping to spread the word about my soon to be success in finishing the BNT, and to promote it to the public. I hope I’m not selling the skin of the bear before killing it. But I feel I’m in good position to finish the BNT, just gotta watch the crocs and not run out of water for too long.