It was a comfortable sleep in one of the bedroom at the Zigzag station homestead. Breakfast is easy with a fully equipped kitchen and there is water available from the rainwater tank. Things that we take for granted in cities are not when travelling in remote country. There is even satellite Internet connection which allows me to keep on contacting newspapers and magazines to inform them of my trip, and that I will be finishing soon. Interestingly I consider that Cooktown is now very close. But for most people here it’s a long way away. In the scheme of things, I’ve done most of the trail. I’m now organizing the end of the trip. I’m flying out to Europe in four weeks for holidays. So I have to find a place to store the bike near Cairns and get my suitcase (which was prepared beforehand) shipped from Sydney to Cairns. Again I have to find a place to get it shipped. It’s something to think of and the remoteness does not help, but as usual I’m all about not planning too early, only just in time. Long term planning just never works and can make one miss some opportunities that just come along the way.
Upon leaving Zigzag I follow the new dirt road the mining company has built. It’s going all the way to the next station, Kangaroo Hill. After a few hesitations, I take a turn at a fork but take the wrong turn right after. Something is not quite right though with my gear shifter and on a small hill, I change gear to a lower one and suddenly, no resistance anymore. The bike and me stop. I have a quick look down there and see that the chain is broken. That is a first, especially because I got the chain changed recently, which in turn caused me all those derailleur troubles back in Rockhampton.
I remain calm. After all, last time the shit hit the fan (or the derailleur hit the wheel), I got it sorted. It caused me some delays, some money, and a few grey hairs. But it went fine overall with a lot of luck. 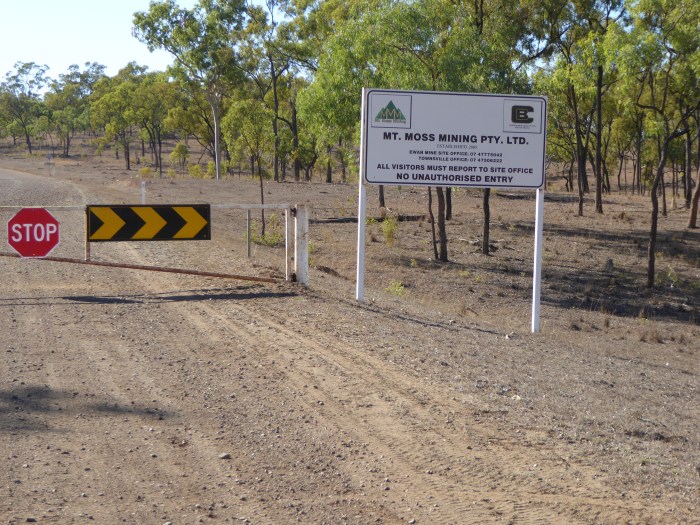 passing near the mine 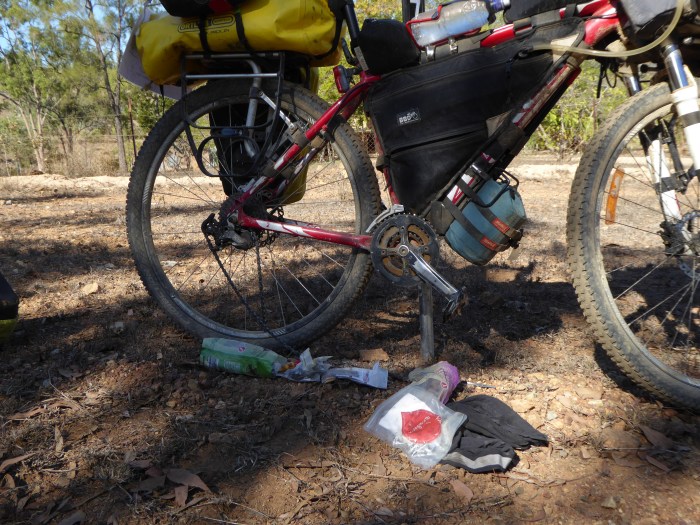 In theory I’ve got everything to fix it. I have a chain breaker, new chain links and pins. Unfortunately I’ve never done the procedure. As crazy as it sounds I’ve embarked in this 5,330 km journey in very remote country without experience repairing a chain. There wasn’t a course back in Sydney on how to fix a chain. I did the other courses though.
Anyway, I get to work and it’s like I’m playing a Lego game except if I screw up, I don’t get to try another combination. Actually I can, but the chain will get shorter and shorter each time I fuck up. Until it’s too short.
A truck is driving by, I’m lucky. It’s one of the four remaining miners on-site. There used to be 120 miners, but they’re all gone as the mine has stopped extracting. We have a bit of a chat about the situation. I don’t feel entirely confident fixing the damages until I can do a bit of internet research and be sure I’m doing it the right way. There is internet back at the homestead, 11km back. There is supposed to be internet at the camp, right next to where my chain broke, but it has stopped working.
We agree on a plan. I’ll try to fix it myself and walk to the camp if I cannot. Then I’ll get a lift to the station to get it sorted there.
Shortly after the gentleman has left, here is Helen, the manager of the Zigzag station coming in her car. She heard the news about my breakdown on the UHF radio.
We decide to have a look at the camp see if we can get the internet sorted. We call the IT manager who guides me through the procedure. He believes it might be a matter of restarting a few network switches. So here I am pulling wires and looking at all this network equipment. It provided Internet access to 120 people. Now there is only four people left so it’s overkill. After a few tries, the internet is still not back up. It’s a little bit of a disappointment as some were hoping my knowledge in IT would help fixing it for everybody. It must get very lonely for those four workers without Internet.
At this point the best thing to do for me is to head back where I came from, do some research online and be sure I’m repairing the chain correctly. I have a feeling I could figure it out, but the thought of making a mistake and having to backtrack and travel to the next City, Townsville, is not appealing. 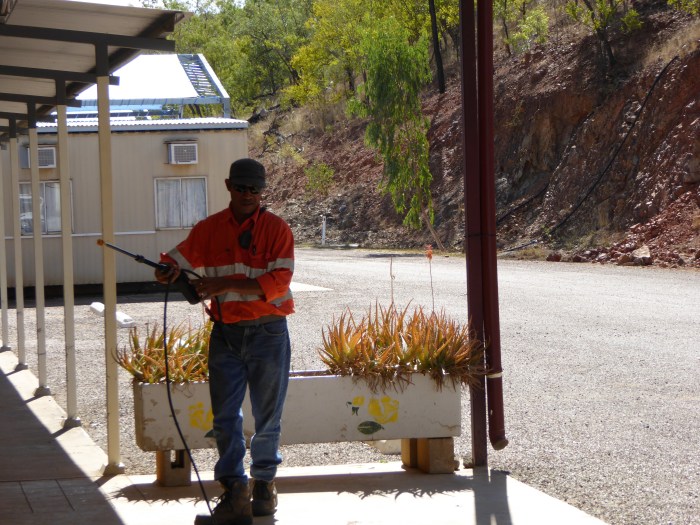 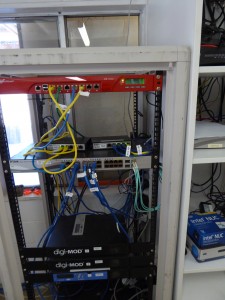 trying to fix the Internet at the mining camp guided by phone. Didn’t end up fixing it 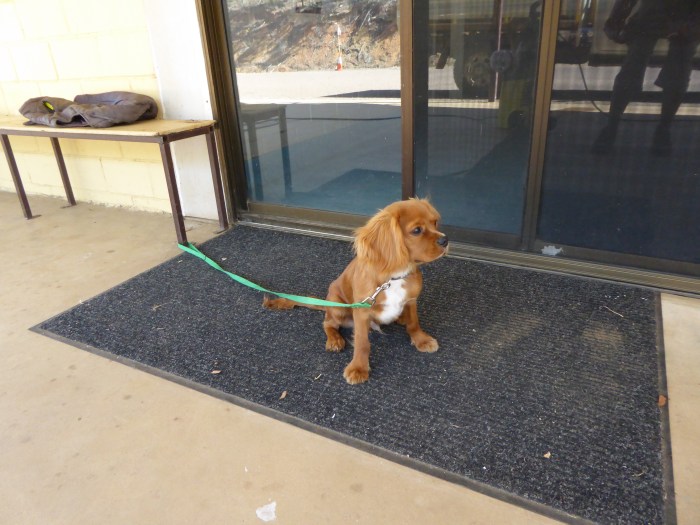 Helen’s dog, needs a lot of attention. Different from the usual cattle dogs 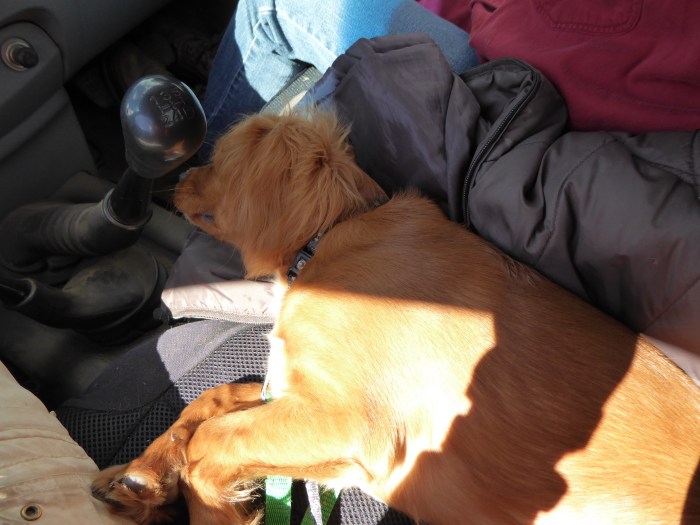 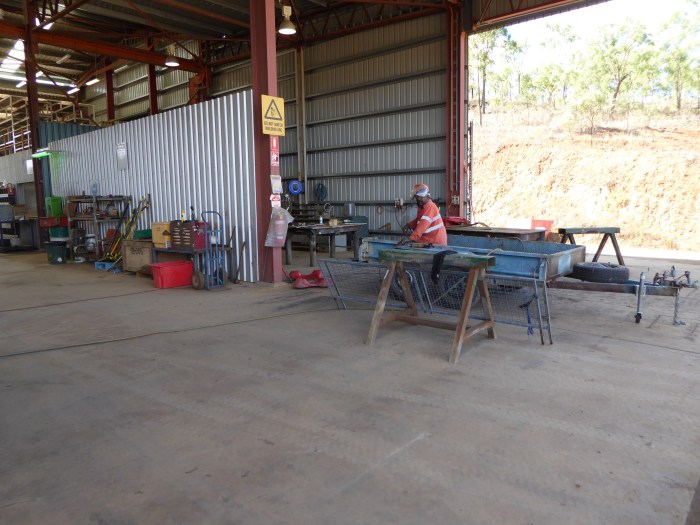 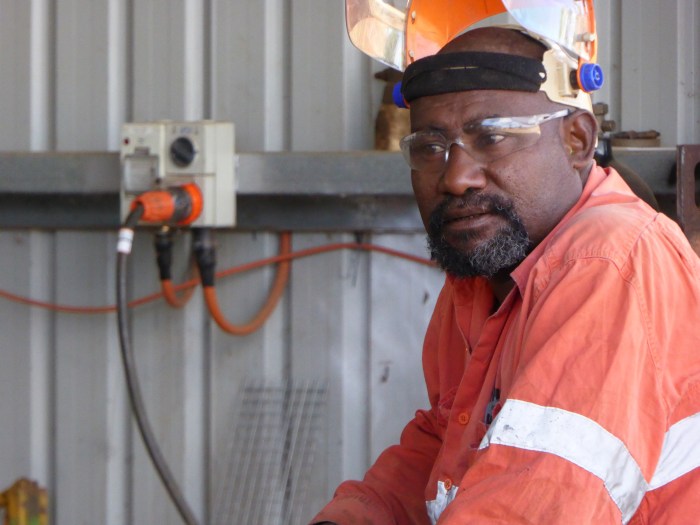 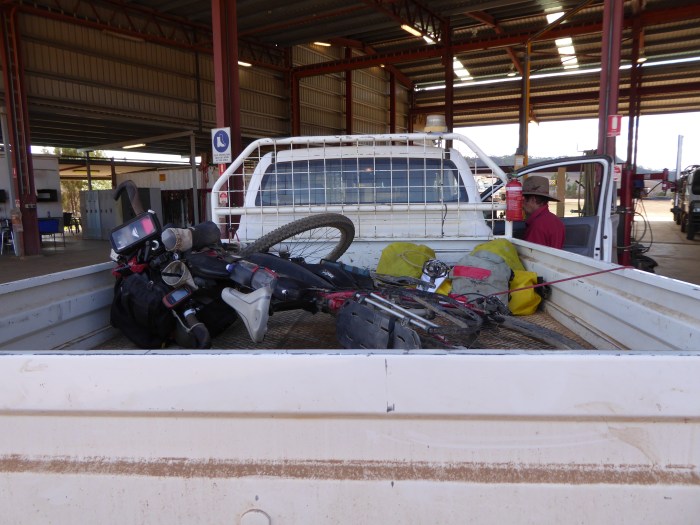 bike being driven around until I fix it 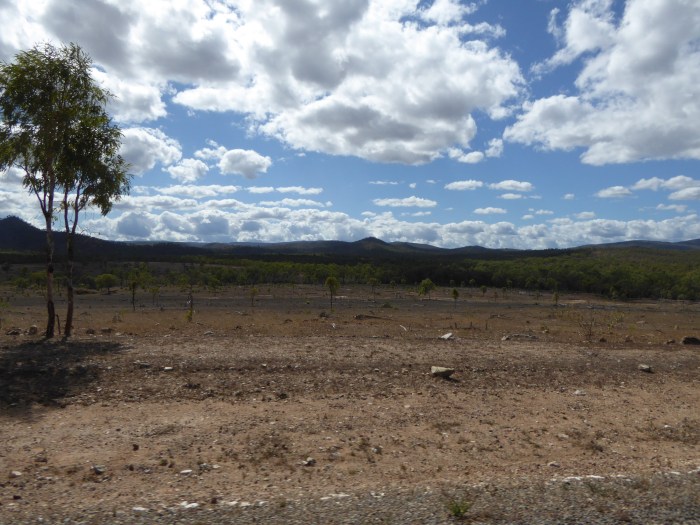 driving back to the homestead for repairs

Back at the station, I get to work and eventually put the chain back together. I’m still not feeling completely confident in the repair. If it has happened once it can happen again.
I use this opportunity to check my emails and have some lunch before going again. I receive an email from the two girls I was trying to meet yesterday. They are trekking on foot the opposite direction. They sound as disappointed as me that we didn’t see each other. What are the odds. I’m terribly curious about them and their trips. 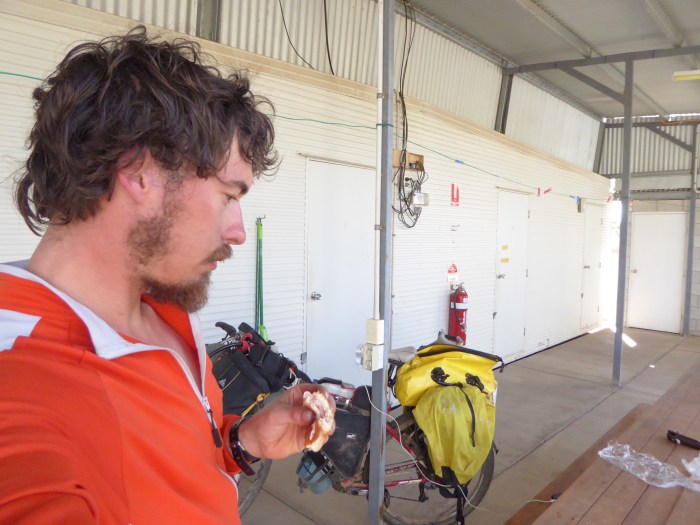 bike is fixed, time for lunch before going again

I get on the road in the afternoon, aiming to reach the next station for a short day ride. Only 40 kilometres for today, it’s not that bad. 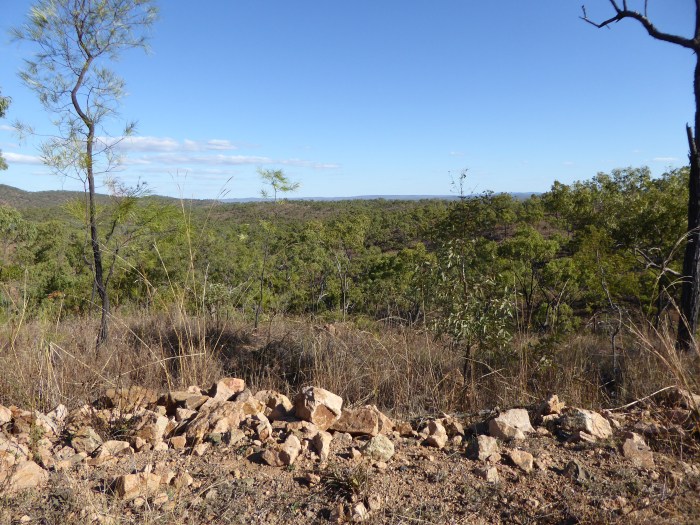 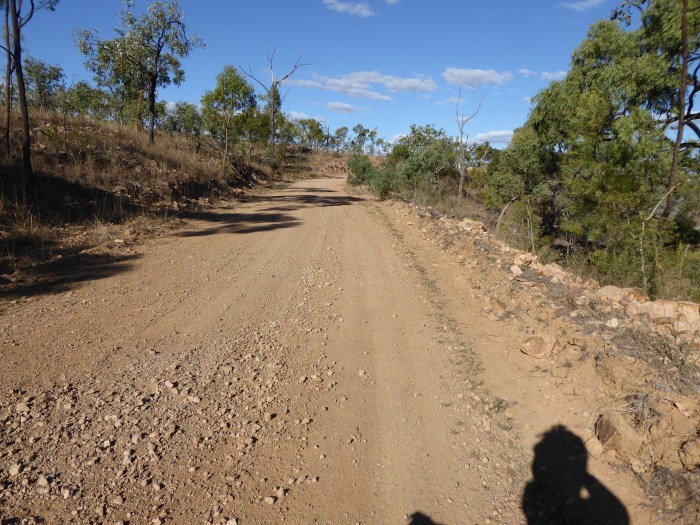 When I arrive at the station three hours later I go have a chat with the owners and we have a bit of a chat about where I can camp, find water and where I’m heading and so forth. The usual stuff. They ask me if I met the two girls. Again, someone wanted me to meet them, the lady adds “They are very pretty girls” or something along those lines. Think what you want, but meeting two young pretty girls in the middle of the bush is quite extraordinary. I’ve met some farmers, I’ve seen a lot of cows and met at of older people. But the young ones, not so many. Well then again some would think of the scene in the movie 127 hours where the main character is hiking the canyons somewhere in the USA and meet two gorgeous lost girls, and show them around. That is before he gets into a serious accident. I’m not willing to do a remake of either scenes. By the way the scene of the encounter with the two girls was invented by Hollywood producers and didn’t actually happen in the real story, the accident did happen). Hollywood does need to sexy up stories. 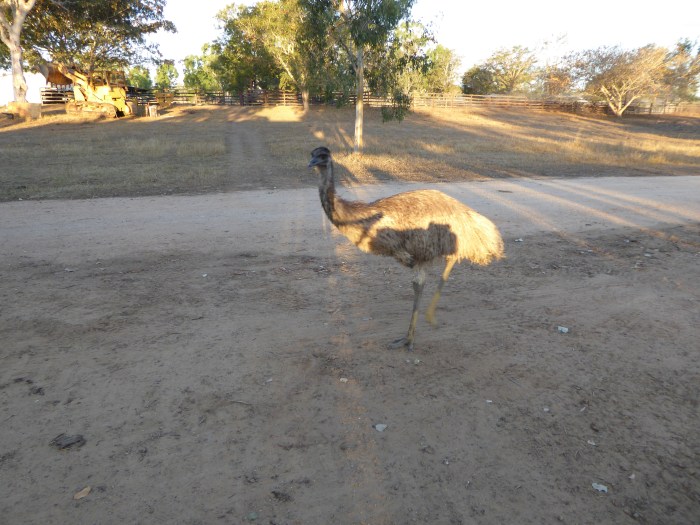 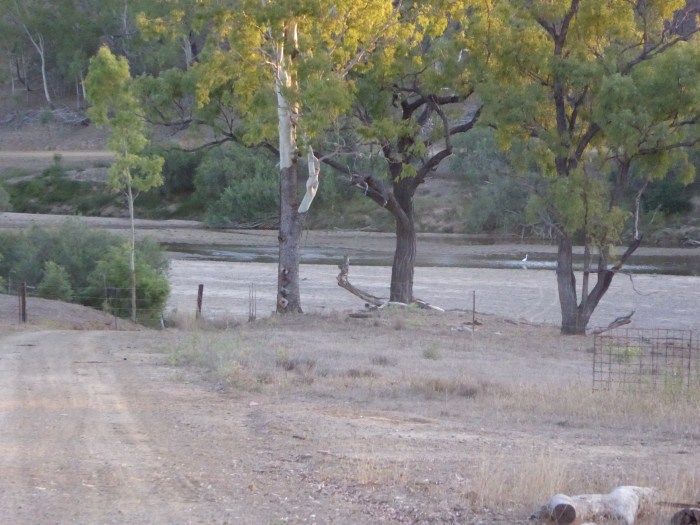 my camping spot by the creek, running again since a couple of weeks 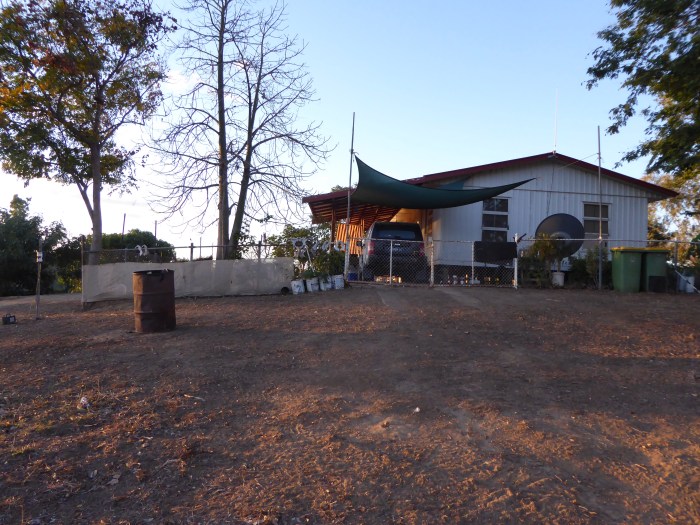 Anyway, I head to the creek for camping. The water has been running again for a few weeks, the farmers inform me. I camp in the river bed. Its is the dry season, so I don’t need to be concerned about flash floods – but I’m not particularly happy with the spot. Later on, I would understand why. The local and curious emus are hanging out near my tent and making all sorts of weird noises. I have to make noises myself to scare them away. If it wasn’t emus, I imagine it’s something that resembles a duck but jumps like a kangaroo. One thing’s for sure, they are not dingos. So I’ll be alright.

Cooking dinner is quite a challenge. As soon as I turn on my lights, all these tiny tiny flies come around. They are so tiny and light that whenever I breathe I risk inhaling them. They even get into my eyelashes. I switch off the head torch and eat my dinner looking at the stars. Romantic but not convenient. For dessert I plan to drink my last hot chocolate, but as I’m making it, I realise it’s dropping on my lap. Turns out the foldable mug I’ve been enjoying so much has a hole. Bummer. I’m going to need a new mug. Eventually all equipment is meant to be replaced, but it is a shame.
It’s very early but pitch dark. The kids of the farmers up the creek are very noisy. They don’t seem ready to sleep, and those Emus are way too curious and big. 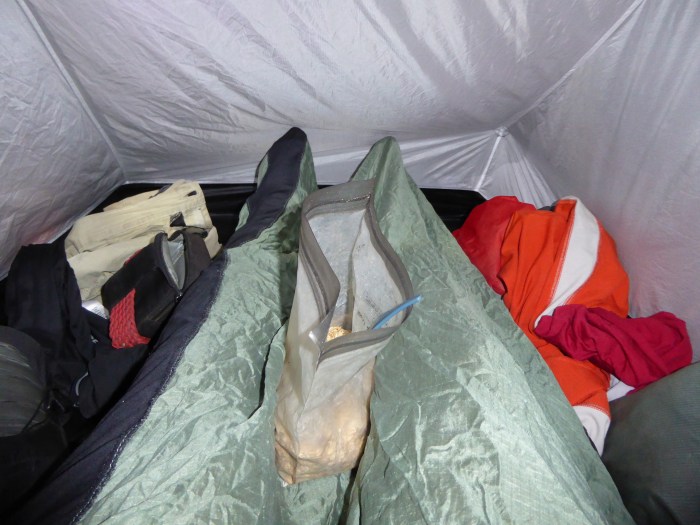 dessert in the tent, away from the flies and the emus 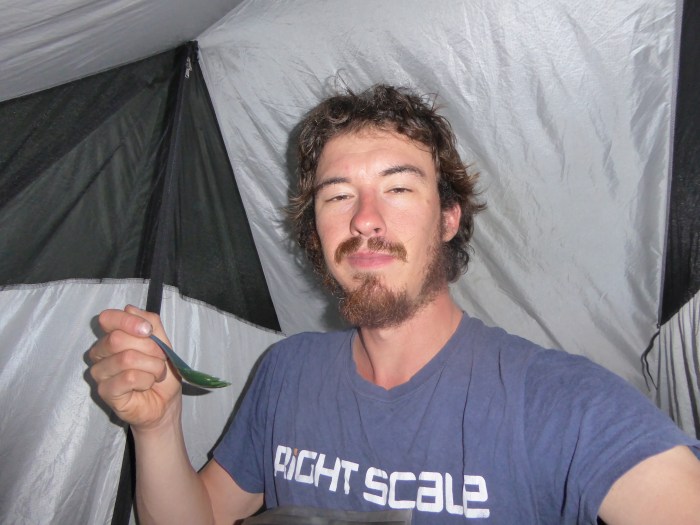 I’m about to sleep and have a lot on my mind, including the coming hills and challenges coming up. It will get hard again, just like the BNT wants to give me a last souvenir before I leave it forever.