Today is a pretty ordinary day. On my way out I chat with the manager of the station to ask for directions. Between the old maps, the markers and the GPS it’s mostly enough to find my way, but one of them is usually missing or inaccurate. The markers are the best I find. When you spot one on a tree there is usually little doubt and I save time by not having to study the maps. They are not everywhere though. those are everywhere, thousands of them. I wonder if ants could take over the world one day I reach the first station, Camel Creek, around midday. I was supposed to be there yesterday but couldn’t make it because of having broken my chain. The manager of Camel Creek is passing by and stops his car to have a chat. Lovely guy. He has seen many travellers on the trail. Mostly from overseas. Some trying by foot, horses, donkey, camels, wagons and so forth. He is keen to chat, it’s shame I didn’t stay overnight here.
Going off his words, I’m about 65km away from Burdekin river. It’s the same river that runs all the way to Burdekin dam and falls where I stopped a few days ago. I’ll see if I can make it but it seems far.
Not long after leaving him I meet someone riding a mountain bike. It’s actually the first time I’ve seen another mountain bike on the Bicentennial National Trail. Although he doesn’t know that he is on the BNT, he didn’t even know it existed. This man is from Darwin and has been travelling through the outback with his wife. His wife drives the car while he rides for four to five hours and then gets back in the car. It’s an interesting way of cycling that I hadn’t considered. I like the idea of the support team more and more. Not for the gear, I’m satisfied with my setup and don’t mind the wait, but more for the company. It’s hard to find someone who wants to and can ride at the same pace. Finding someone who can drive a car is easier. He is a teacher and because most of his job is done online nowadays, he does not have to go to the university that often. That means he can travel and ride for an extended period of time. He just needs to download students’ assignments once in a while and upload the marks and comments later on. Too easy.
The mountain biker tells me that the Burdekin river is not far away and there are other campers and firepits. That is a good reason for me to push on and camp there tonight. I’d love to stay at a good campsite.
As I’m heading off I remember that he is not travelling on the BNT, he is on the public road. There is little chance I will see the campsite he’s talking about. My left knee has been a little bit sore today and now my right knee is sore too. Nothing bad, but I need to keep an eye on it, I wouldn’t want it to get worse. I’ve learnt to be aware of any suspicious signs. When you’re warm and excited the pain can dissipate, and it’s only at the end of the day you realise you pushed too hard.

The Burdekin river is actually five branches. Two of them are dry. I cross them all and camp near the last running one to get access to water. It’s not bad and I’m here early enough to clean myself and gather some firewood for cooking. When I look at my food provision, I see that I have a few spare meals, and allow myself to double the ration of rice for dinner. I hope it will go well. It’s quickly swallowed anyway. No problem with that.

On the way down to the Burdekin river I’ve had a tiny bit of network coverage. Enough to send two text messages and download the emails. The two girls trekking the other way have replied. We were probably camping only a kilometre apart. Only I arrived late and they were camping one kilometre off the BNT. It is a shame, we were all very keen on chatting. One of them expresses her disappointment. So many questions to ask and questions to answer. The usual why and how. I shall find a way to meet them one day. Being on foot, they will be travelling for a long time unless they pull the pin. So I could always redo a section with them someday or greet them at a campsite near home. Speaking of home though, I don’t have one. So I’m not sure where I will be in a few months.
I’m quite excited at the moment to be starting the last section of the BNT. At the same time there is a little bit of sadness, not sure what it is. No need to understand everything I feel, I’ll just roll with it. 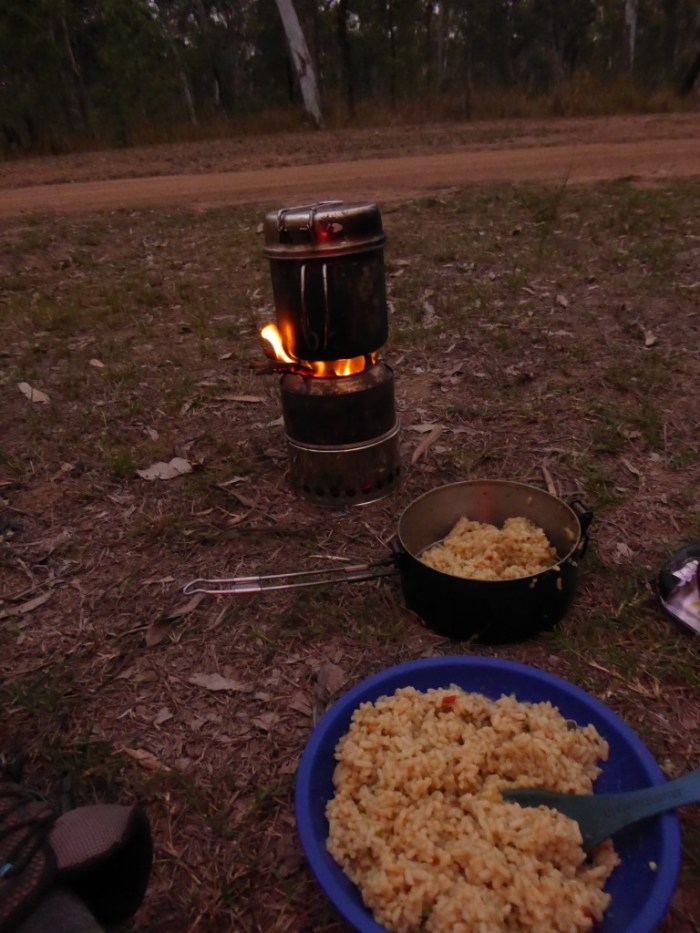 Two serves of rice, almost enough for me