Last night I slept in a swag and it felt like dust was falling on my face all night long.
Without the tent I don’t have too much packing to do, but it’s still very cold.
I head to the living room where two of the kids are sleeping right next to the gas heater. Probably a good idea. After a huge serve of porridge, I leave Jason and thank him for his hospitality. 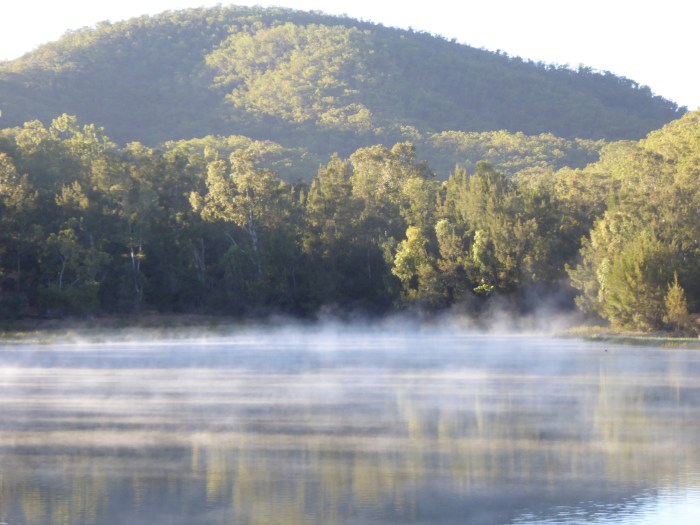 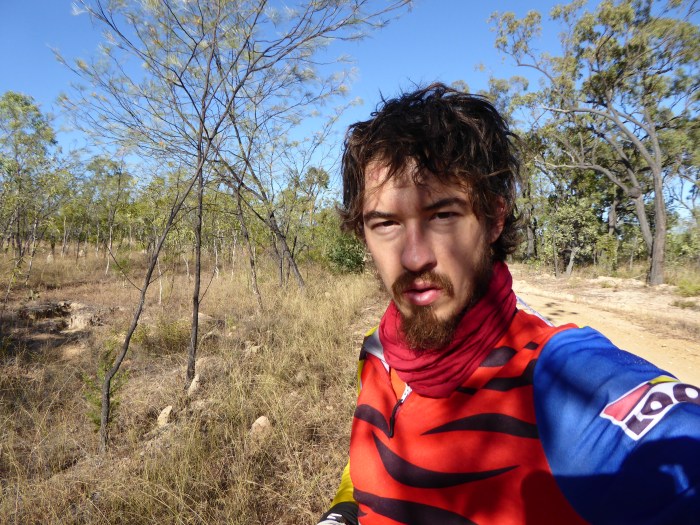 Putting some layers on to fight this cold weather

As soon as I start riding the cold catches me. My hands hurt and my body is sleepy. Funny enough I left my under gloves at Kathy’s place after her recommendation to leave some of my winter gear. By doing so I saved a few hundred grams, but it was not worth it. Without them I’m freezing and can’t decide whether to keep my hands on the handlebar or in my pockets.
Around 8:30 it finally warms up and soon it’s too hot. The first 10km were flat and easy going, slowly ascending the hills. 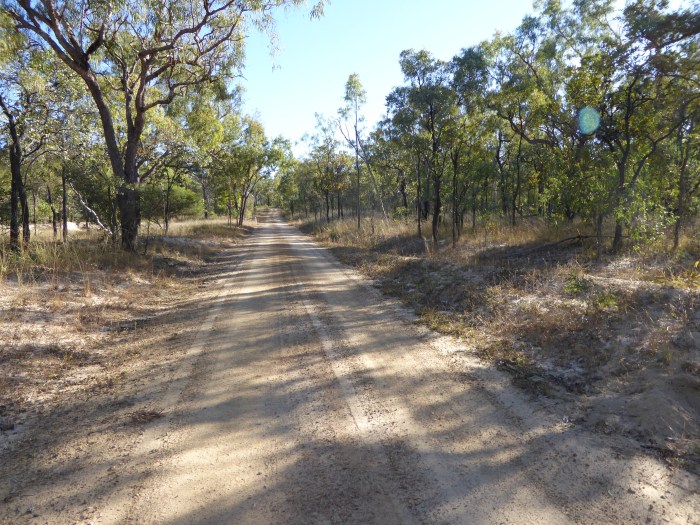 However things start to get difficult after Mt Satanary. It’s a tough track, rocky and slippery. Pretty much unrideable. It goes up and down, mostly down, and at times I feel like I’m losing control of the bike. I walk a lot of it. It’s pretty exhausting. 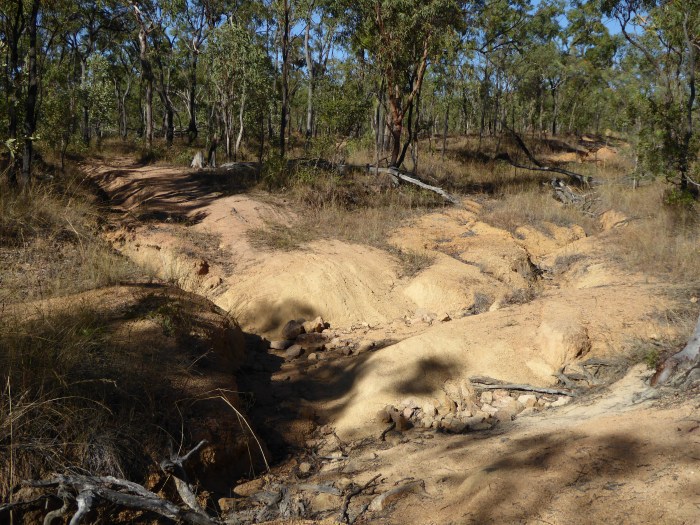 That is no easy ride, a lot of this, steep and washed out 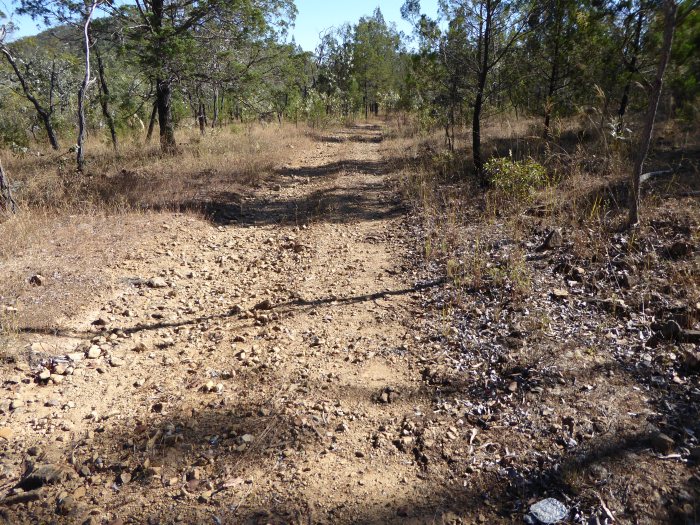 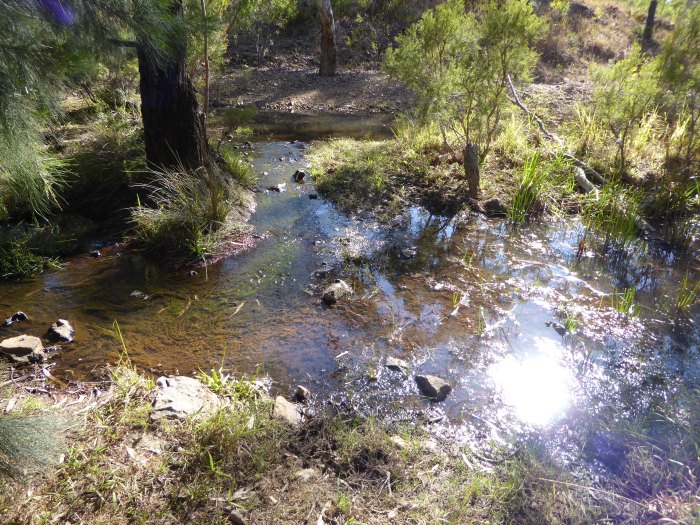 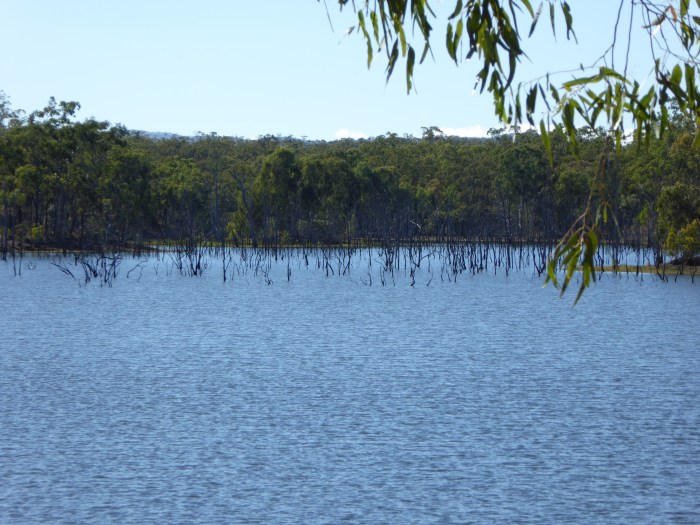 I figure I must be going down the range and at some point, things will have to get easier. This reminds of Victoria. The BNT is making sure I don’t take it too easy for the grand final. I got used to long and boring stretches on public dirt roads, at least this is not boring.
At some point the view is clearing and I can see some fields down the hills, that look promising. 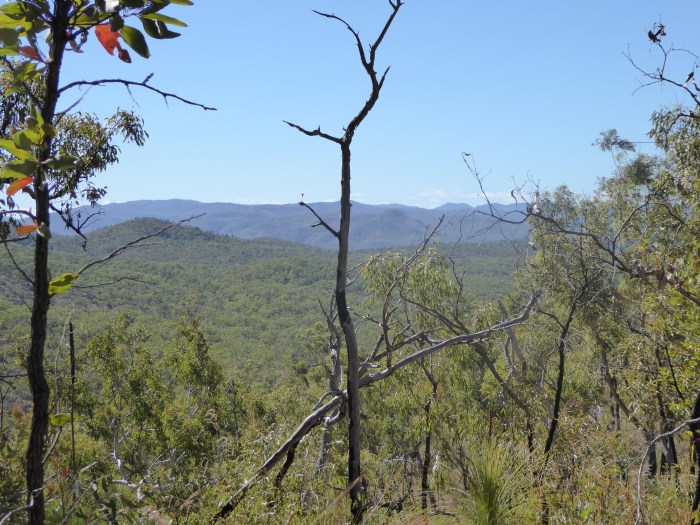 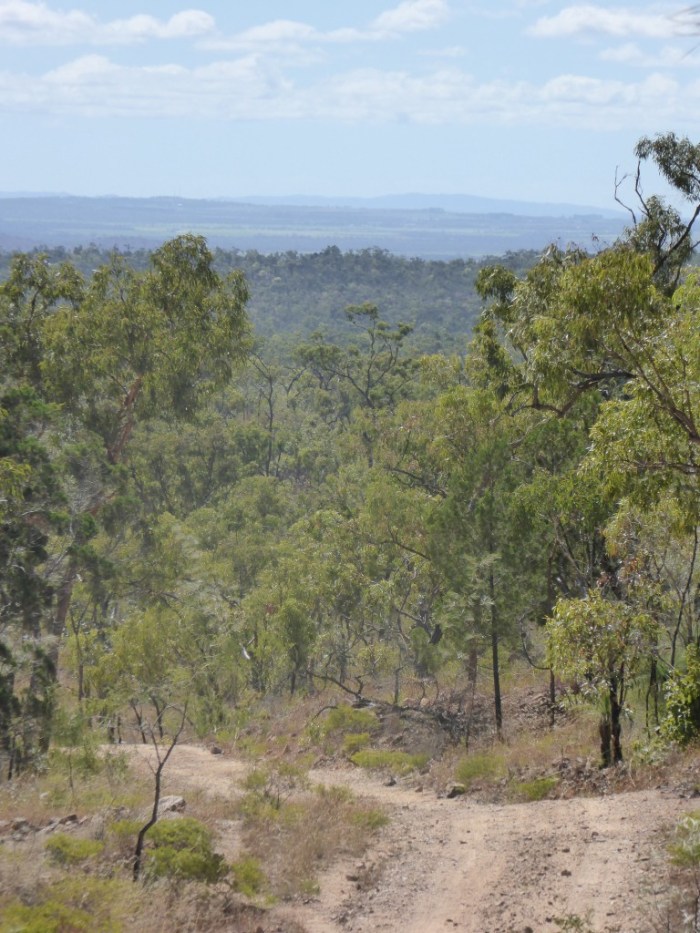 I force myself to stop for lunch though so that I don’t hit the wall. I get a tiny bit of network, enough to have a quick call with my girlfriend and check emails. I’m happy to see some articles will be published about my adventure. It’s not about the glory but it’s nice to read someone else talking about my trip, it’s almost a reward on its own.
Once I get down the valley, I see that I was right. There’s a huge mango farm here and it feels nice to see so much green and trees. I like it much better than the usual dry bush and cattle. 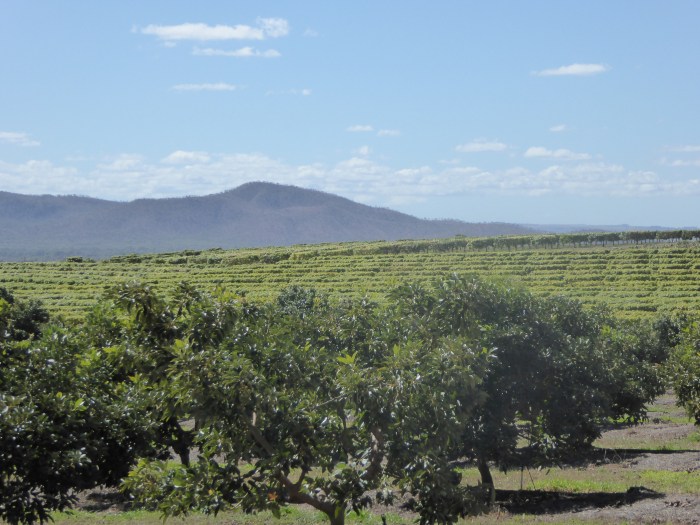 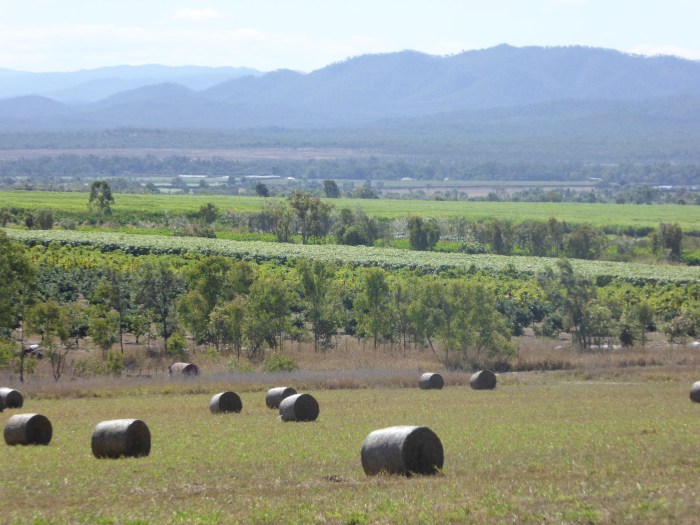 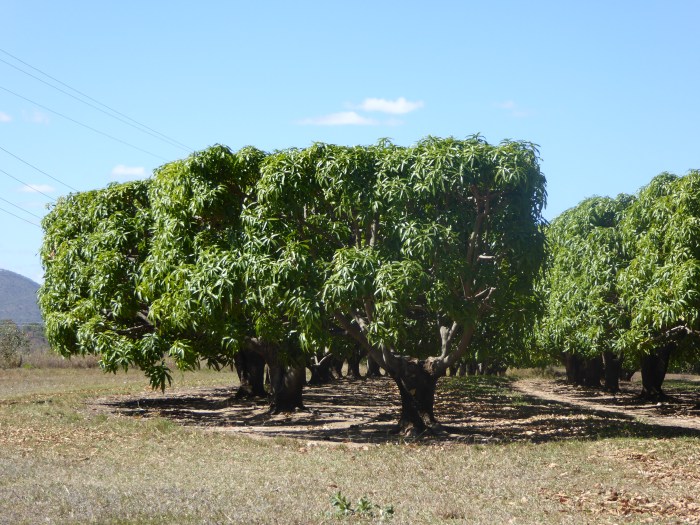 I cross the highway and start a new map of the guidebook. I’ve done almost 50km today and if I want to get a good camping spot, I have another 40km to go. It starts easy with some wide dirt road that slowly becomes more narrow. 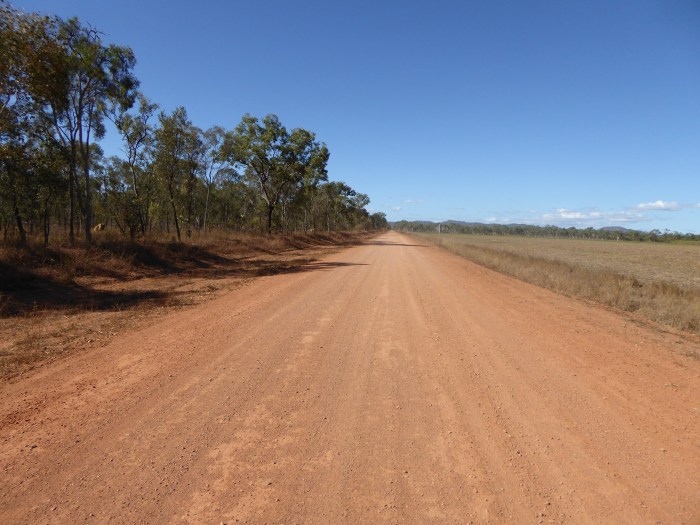 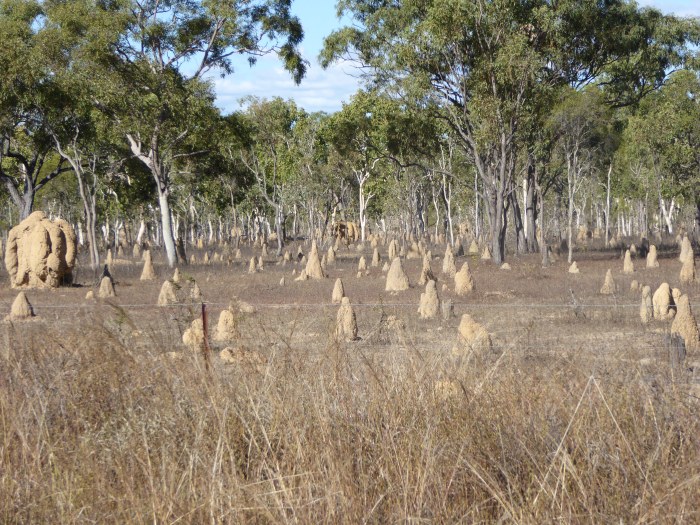 Must be billions of ants under the ground 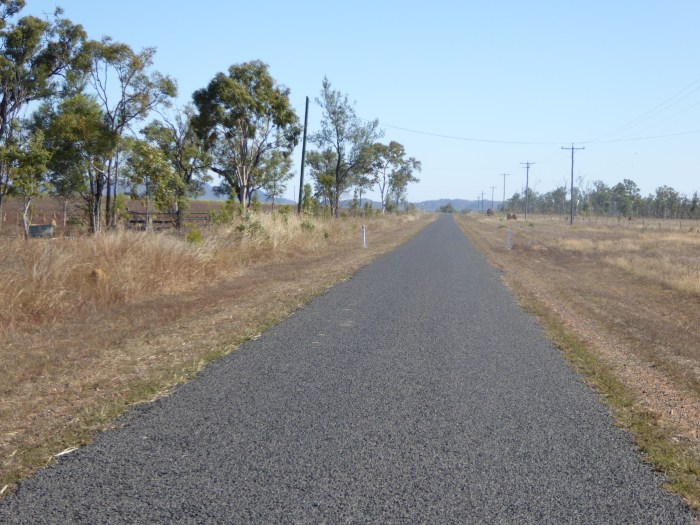 I have a lot of energy, which helps, my body is finally working efficiently.
I reach a turnoff with the option to ask for shelter or space for camping. These people are known for their hospitality, but I’m in the zone. I want to get to Kingsborough or at least close to it, because after Kingsborough I have to decide between a long detour on a good dirt road or a difficult section. 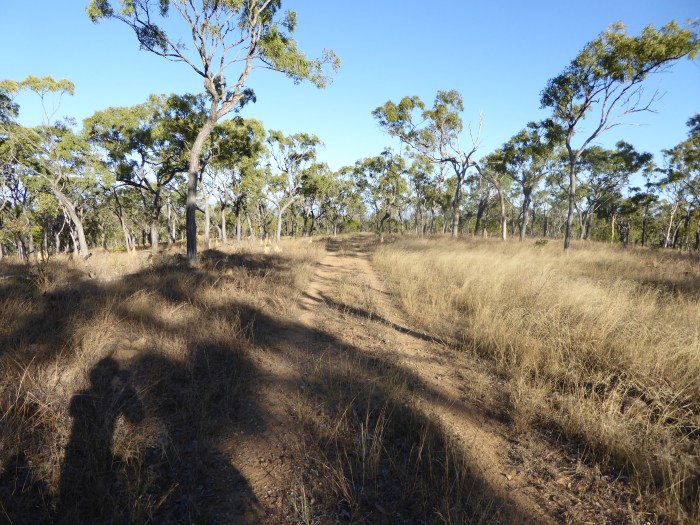 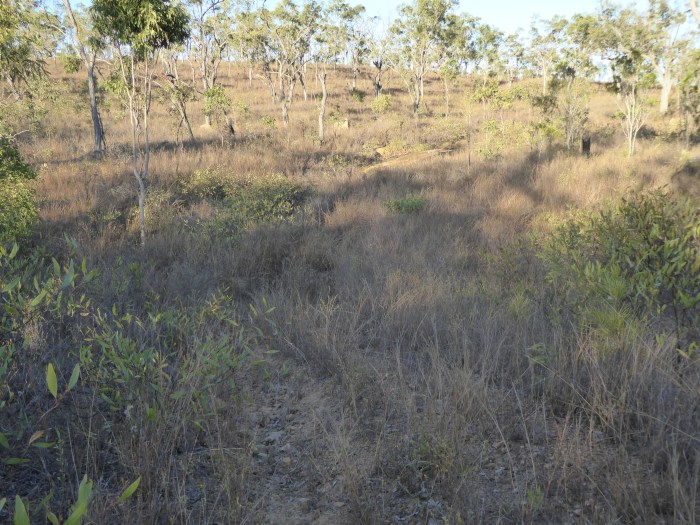 At this stage it’s a race against the sun. It keeps going down and I still have 20km to go. The track gets sandy, rocky and grassy, but my energy increases even more. I keep eating and drinking and it’s working well.
I miss two turn offs which slows me down a little (as I have to backtrack), but not much. I’m very pleased I’ve been able to prepare the route on the GPS beforehand, so huge mistakes are avoided. 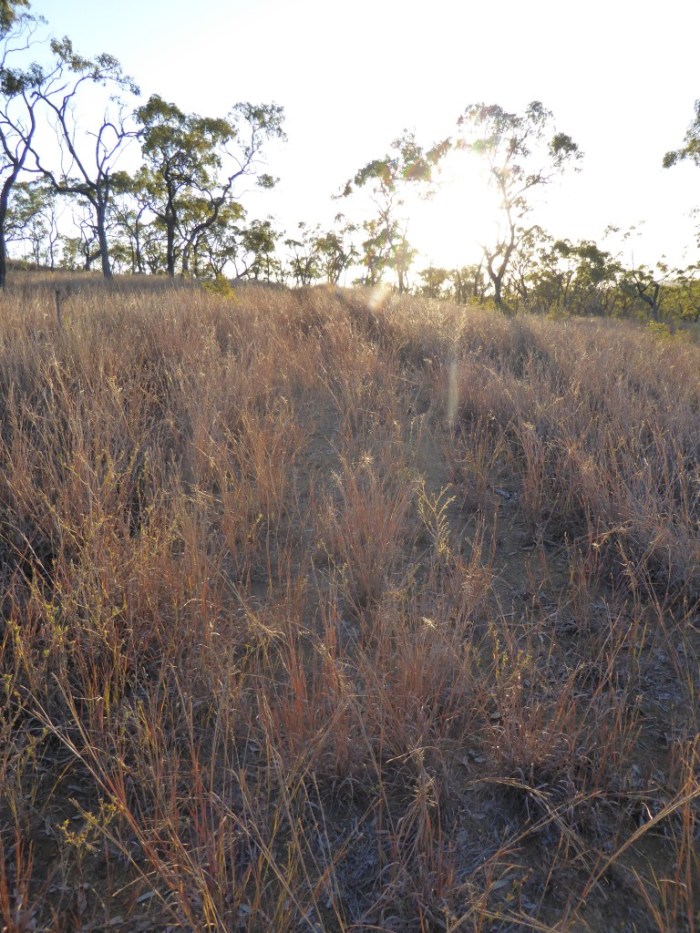 The sun is quickly going down 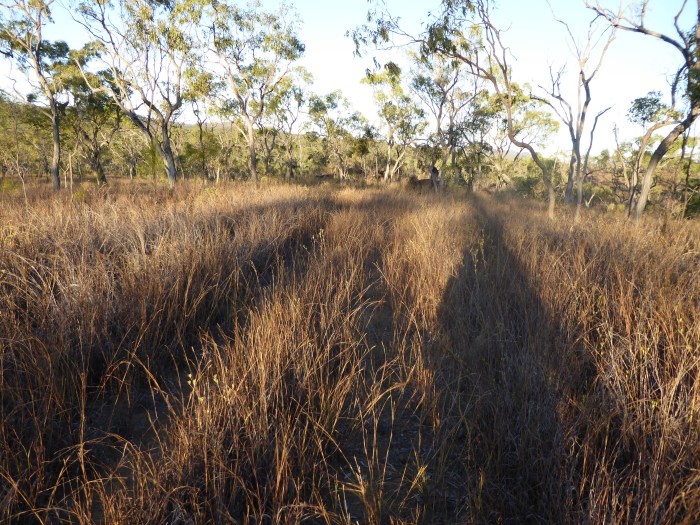 The track is less and less visible with the grass 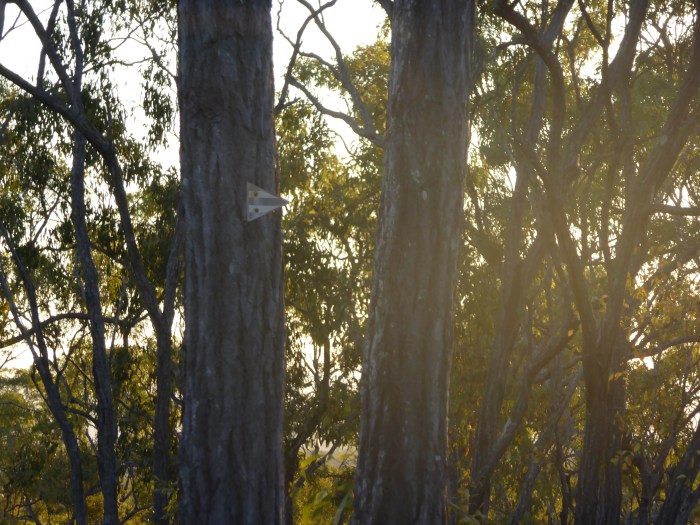 It’s easy to miss a turn off 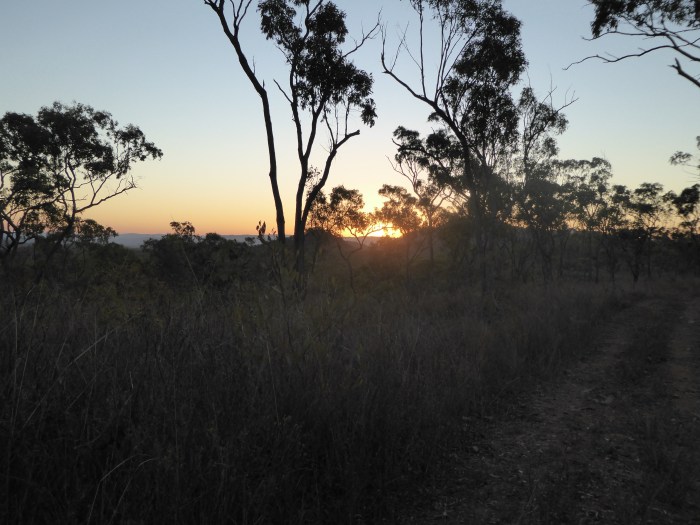 Not much time left

The sun goes down and sets and I make it into Kingsborough not long after. I look for a campsite but also aim for the only house. There is one resident here. I could not get him on the phone yesterday, I must have dialed the wrong number as I was hung up on.
Anyway, I ask him about the best camping spot and he shows me where I can shower and use the toilet. It’s a cold shower as hot shower requires to feed the donkey, and that takes time. For those who are unfamiliar (like Michelle was), the expression ‘Feed the donkey’ refers to making a big fire to heat the water up. It takes a couple hours of work. 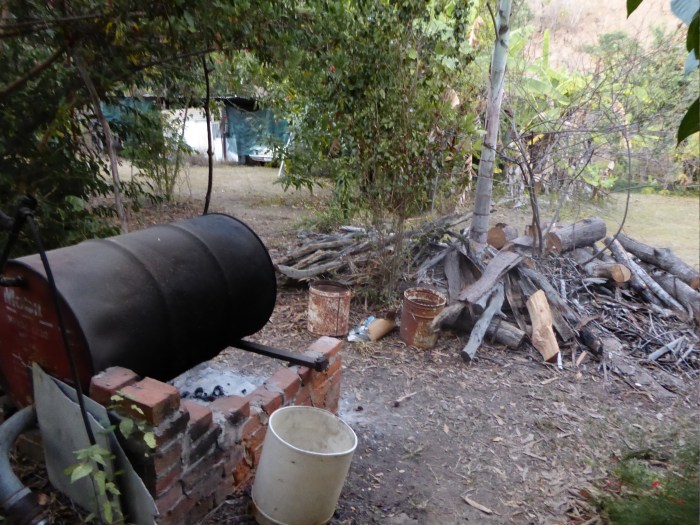 The donkey needs to be fed. It’s a firewood water boiler. 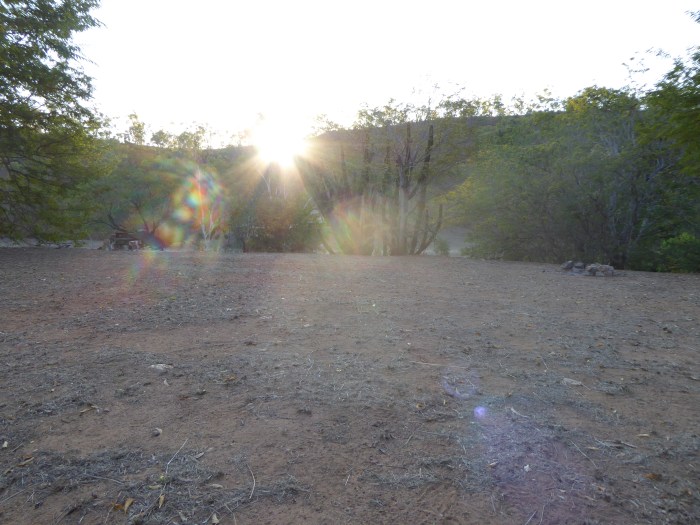 Camping in the garden of the sole town resident

While cooking dinner by my tent in the resident’s garden, I check my options for the next day. Considering that I’m used to bad terrain and that I’ve got a lot of data to help me navigate, I decide to take the short way. Im hoping to cover the 60km in one day and be at Mt Molloy before it’s dark. That is a long distance for what could be a bad track, but I just can’t wait to be by the beach in Port Douglas. It’s the first time the BNT comes so close to the beach and I intend to enjoy it. I came to Port Douglas years ago and I know it’s a very good spot and it’s crocodile free.
Ike, the resident, has announced it will be 1.5 °C tomorrow. I’ll probably wait in my tent a little longer before venturing on the track. I need working hands to handle what seems to be a difficult route. I still don’t know why the next three maps are closed, but I feel like they must be close to opening as all the data is there.