I know what to expect today and I’m prepared for the worst. I’ve made my decision. I will follow the official BNT route despite it being closed. The detour would be safer but I want to make it to Mt Molloy today to put me in a good position for heading to the beach at Port Douglas the day after.
Ike, the resident of Kingsborough who let me sleep in his garden and use the facilities, offers me some bananas before I leave. Some of the many fruits he grows here. His house has so many book shelves, thousands of books. The house also has three satellite dishes. That might make up for not having mobile phone coverage or internet. 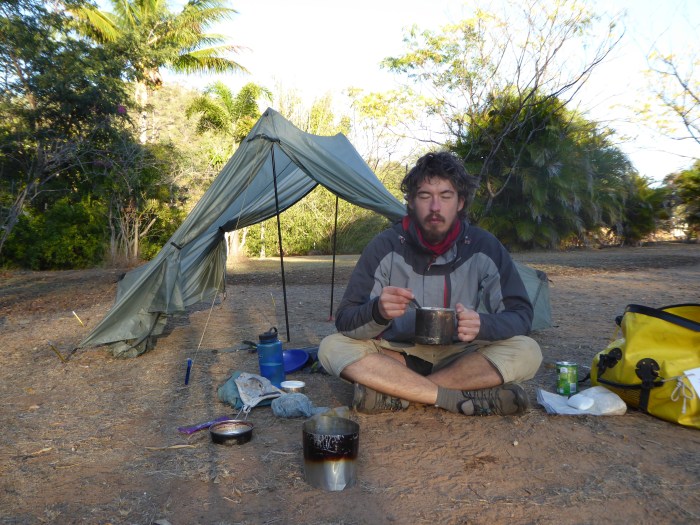 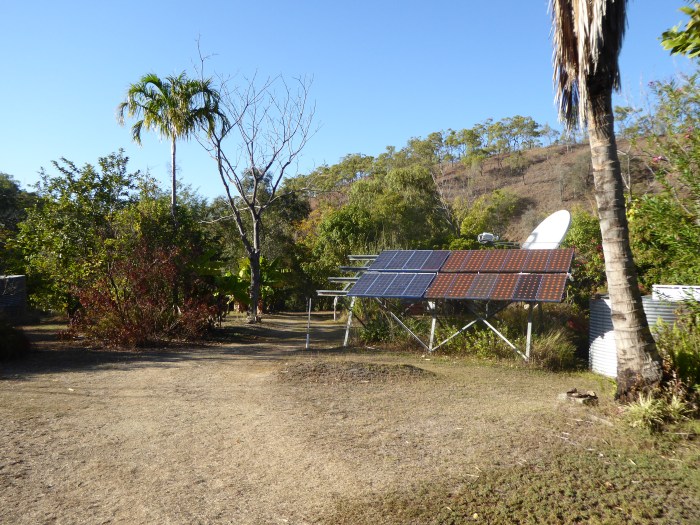 Ike tells me that I should keep the fence line on my left side until I reach the Kingsborough River. I will keep that in mind.
Once riding, the first five kilometres are slightly uphill on a very rocky double track. For a little while I think it’s really not that bad. I expected some serious issues with the track. 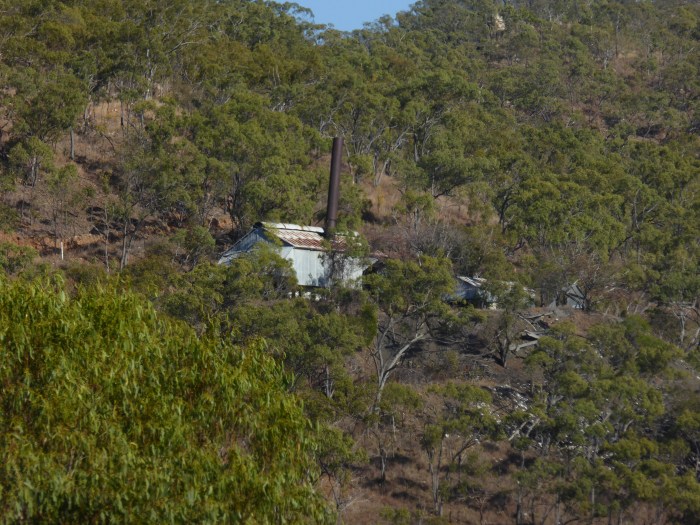 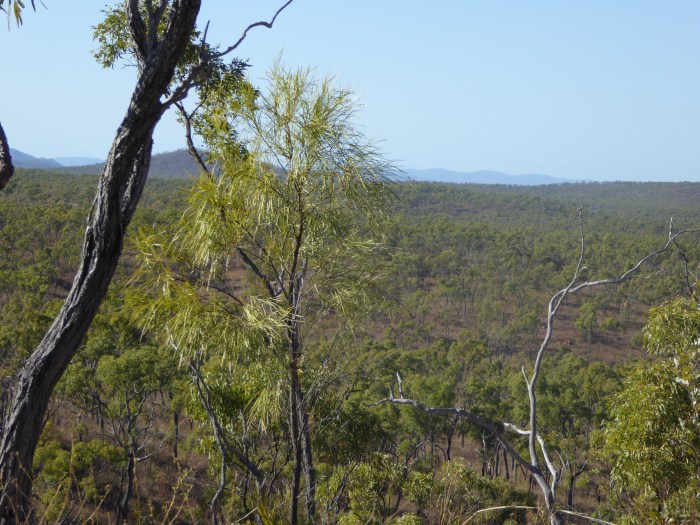 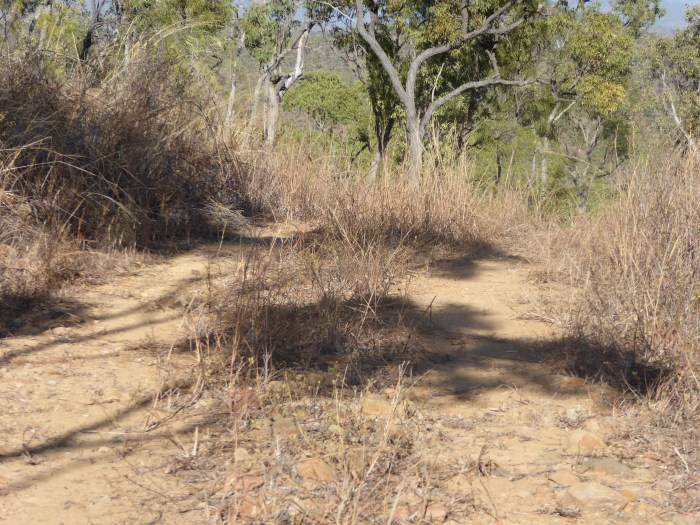 So far so good. Just rocky

At the top of the hill there are many BNT markers that indicate to go right and follow the fence line. That looks good, I head down the hill but soon realise the GPS file I’ve got is indicating I should have gone through the gate instead of following the fence line. I backtrack uphill. It’s not too annoying at this early time of the day. 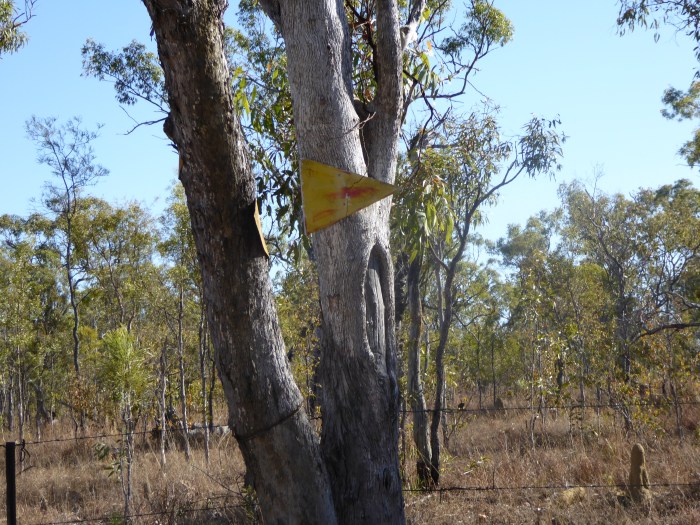 I make it back and this time go through the gate. The track is unfortunately not obvious. There is a first marker but then nothing. The cattle track disappears in the grass, rocks and trees. Although it’s fun at first, I’m progressing extremely slowly, zigzagging between the trees and walking over the rocks. I’m having second thoughts. The track I took initially, following the fence, is heading the same way but seems to take longer. But I know that a well formed track is always faster than bush bashing, always. 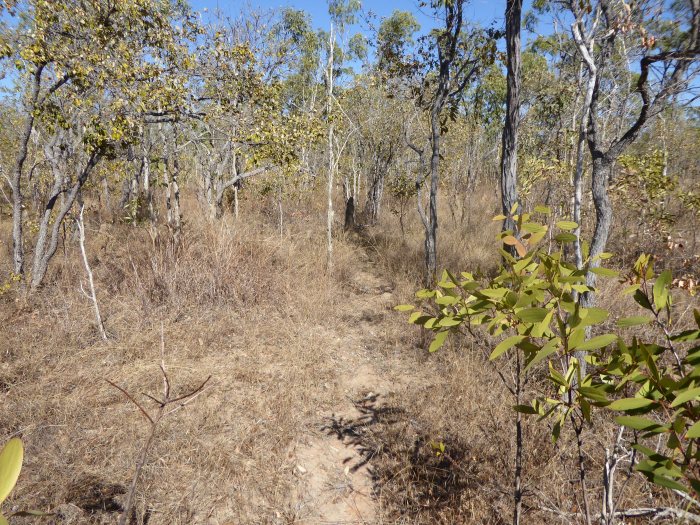 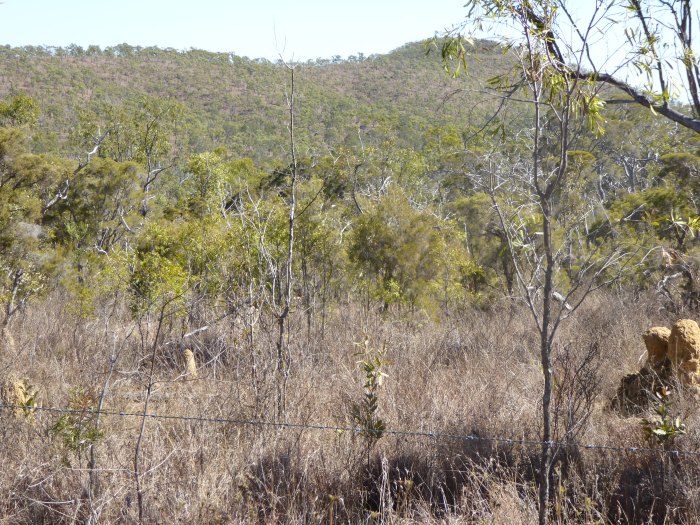 I decide to backtrack again and come back to my first option. In 30 minutes I had only moved 500m or so in the forest. It’s a pain to waste so much time and energy but I know I’m doing the right thing.
Back along the fence I go up and down the hill, walking a lot of it. Its not suitable for mountain biking really, although it could be worse. At least the track does not disappear. 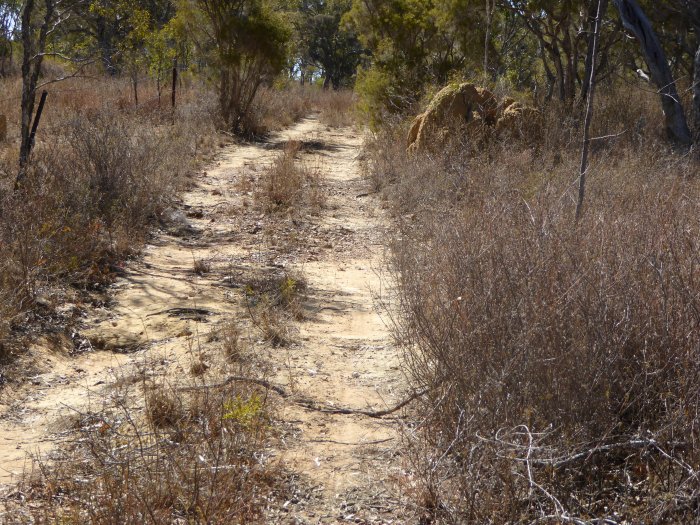 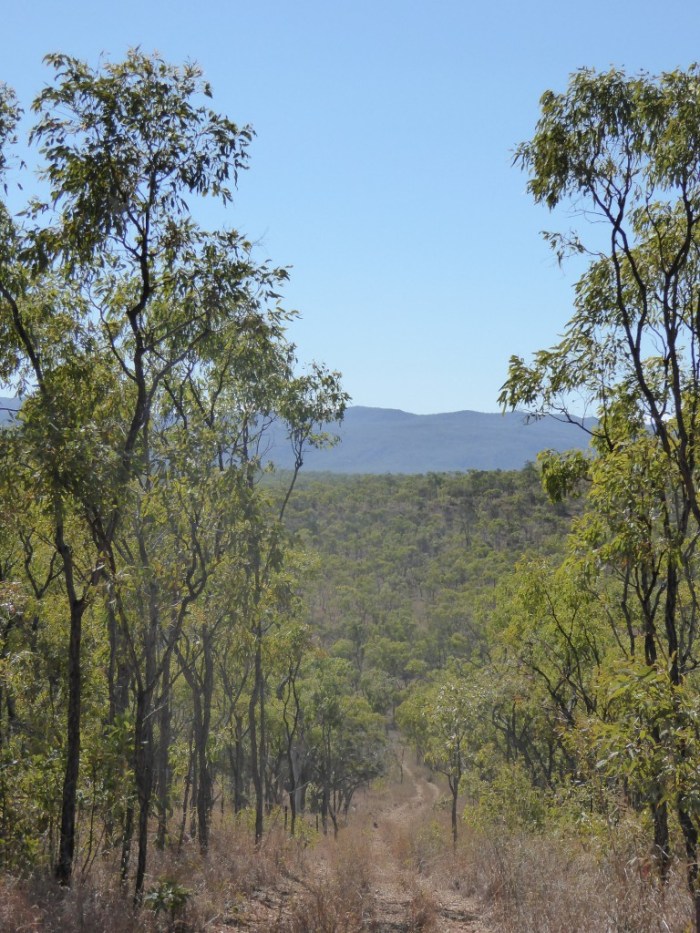 The big hills in the horizon line are pretty intimidating and I wish I wasn’t going over them.
Once I arrive at a T Junction, I head left and the track is slightly better, less steep. I make my way down the Kingsborough river. 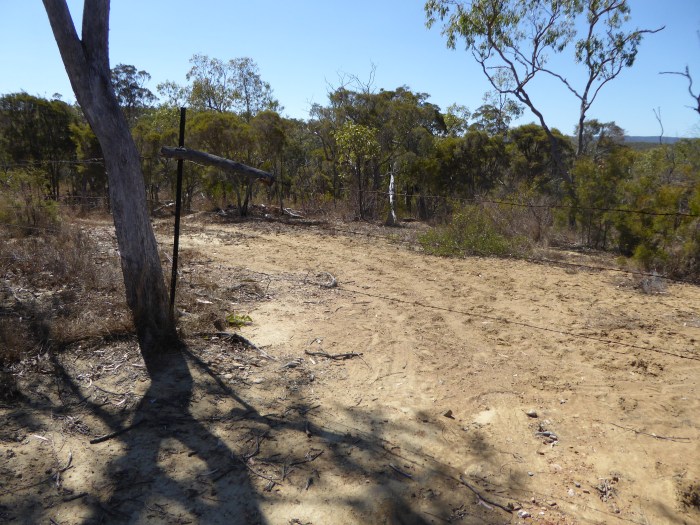 Making some progress, turning left to get back on the official track 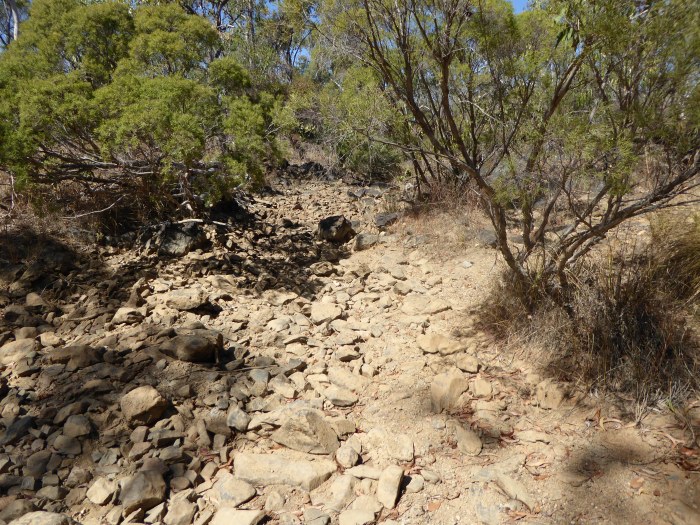 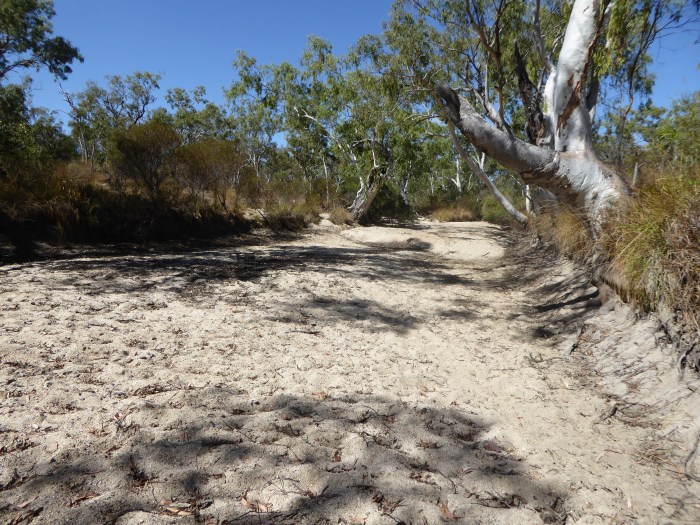 Kingsborough river is dry too

It’s dry, not a drop of water. I started the day with a little more than six litres and I wonder how much I will use today. It’s already pretty hot and I keep on drinking. In the back of my mind I remember the BNT notes saying that it would take an hour for a helicopter ambulance to get here. I picture myself pressing the red button after falling over. Would I still be conscious to press it? How would I be sure I’m in an emergency situation. As far as I know any head trauma must be monitored, especially when losing consciousness. I believe I’m thinking about this to assess risks and not take too many of them.
After crossing the dry river bed, the track is not so obvious again, and I keep a close eye on the GPS. I deviate at times and have to backtrack a little. It’s not a good idea to deviate for too long as I might end up on the wrong side of a gully or the valley. 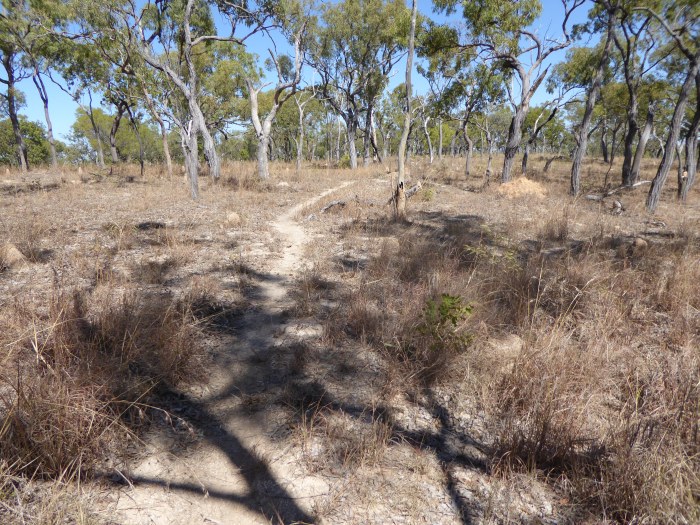 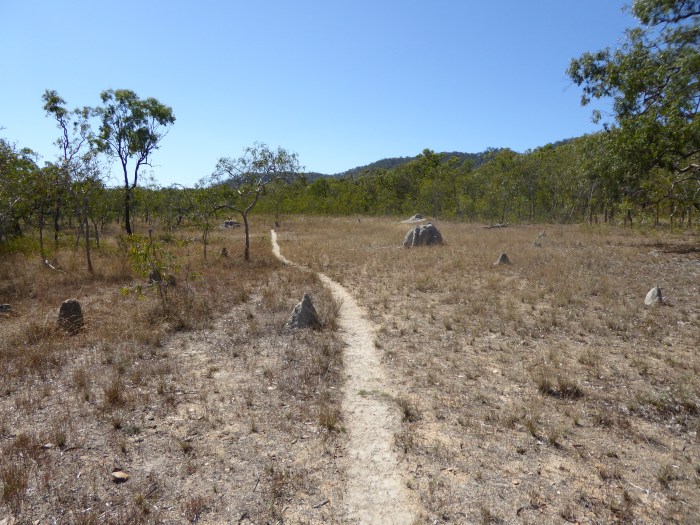 A clearing is always welcome 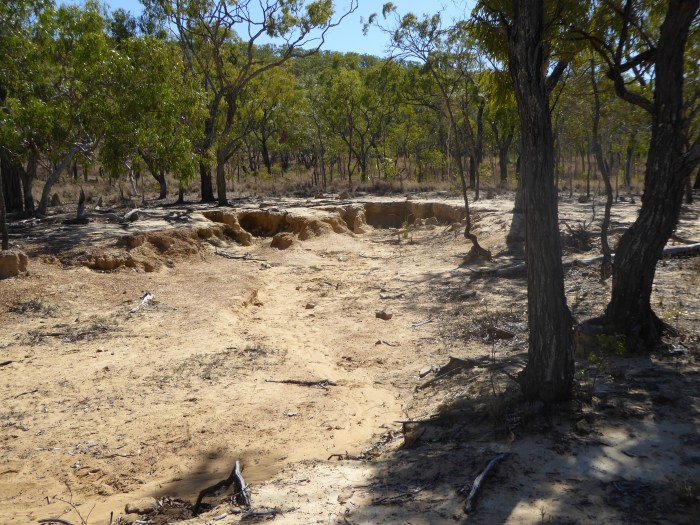 I imagine in the wet, water would be flowing here 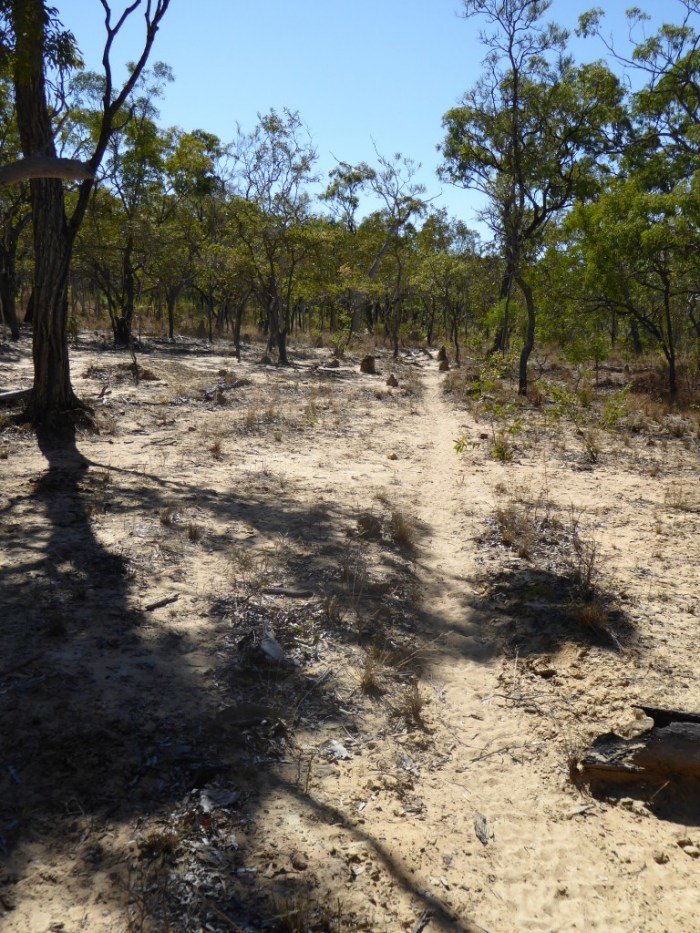 There are a lot of BNT markers that are helpful but it’s never enough and it’s still so easy to miss some.
The track is very hard work. I have to push, pull and carry the bike often.
The landscape is amazing, with dense vegetation greener than what I’m used to. Compared to last week, it’s a dramatic change for the best.
Suddenly my chain breaks on an uphill. This is the second time this has happened in a week, too often to my liking. It broke right next to where I fixed it. If I can’t fix it I’m up for a 35km walk up and down the hills pushing heavy equipment. I would not have enough water. 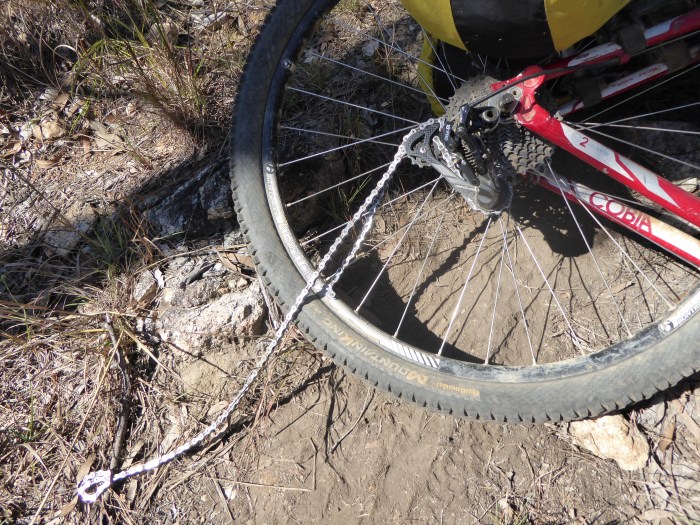 Fortunately I repair it within 15 minutes. There is not much shade here and I want to be done with this very technical and physical section soon.
After a while, I see a clearing down the hill. This looks like an open valley, it must be the cattle station. This is a nice sight. It looks flat down there. 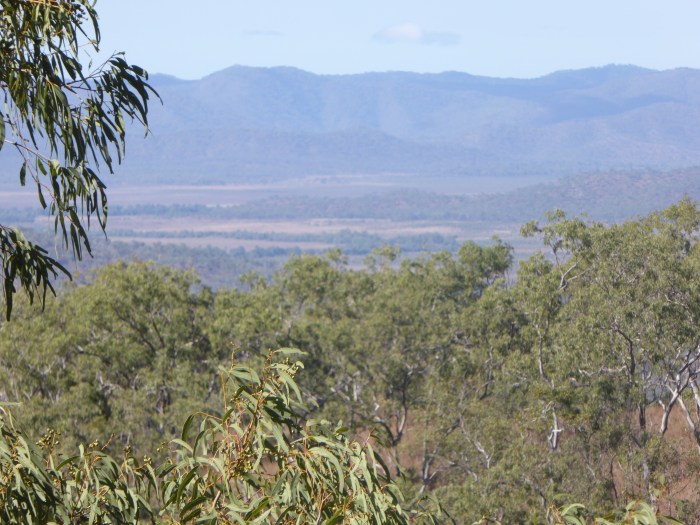 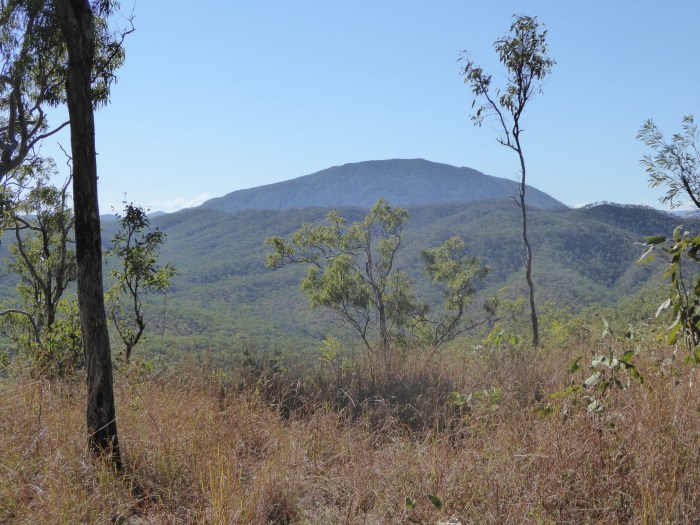 I head down the hills, and soon I’m in the valley. It is flat and grassy. Very enjoyable. It’s time for a quick lunch break, I can’t afford to spend too much time here. Mt Molloy is still 30km away and it will be dark in two hours. 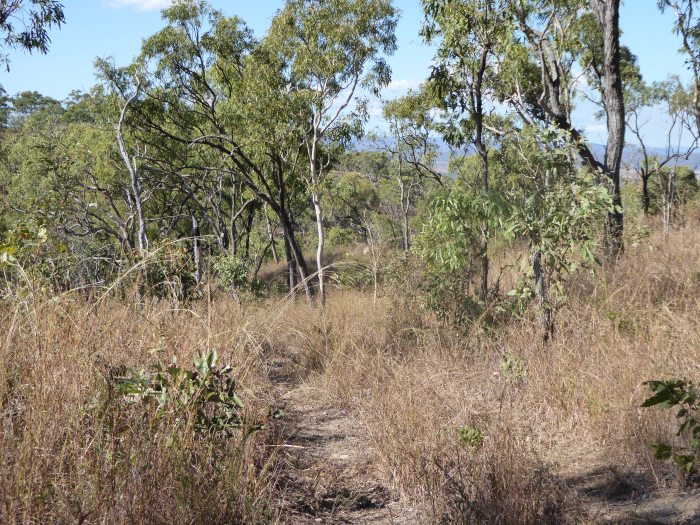 Down the hill to get to the flat Valley 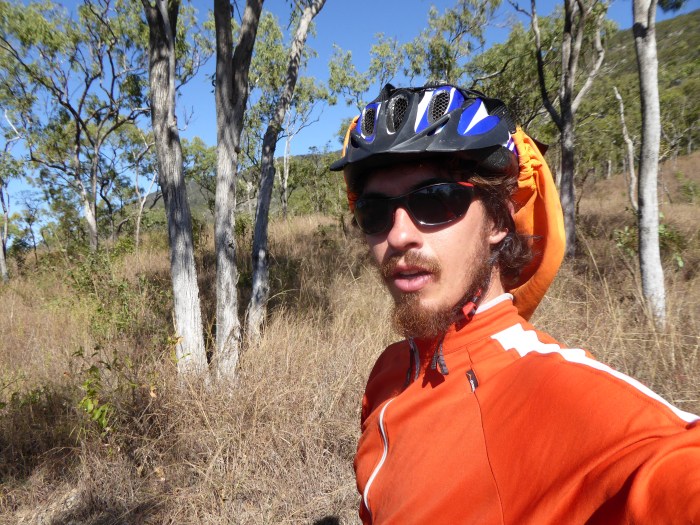 Hungry at 3pm, lunch time. It’s rarely a good idea to delay lunch, but I wanted to get out of this bush 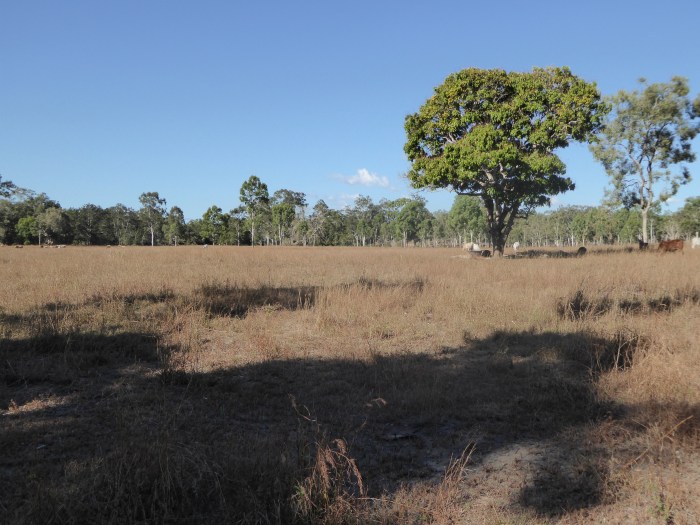 Fortunately the track is near perfect. Flat, and in an open valley, a smooth ride. This place is breathtaking. 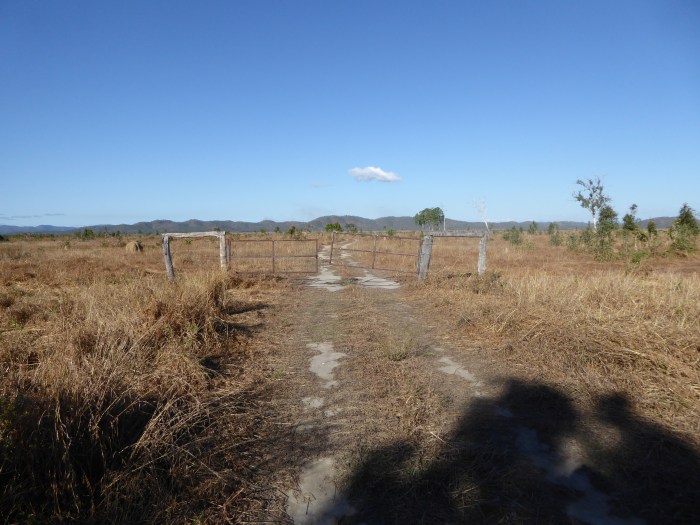 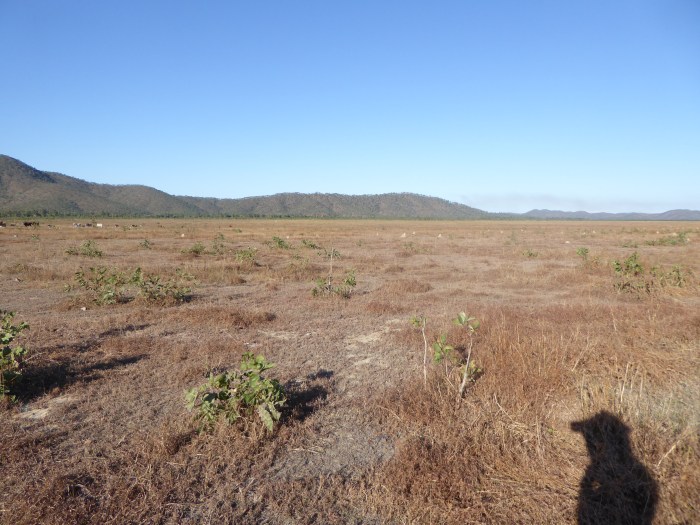 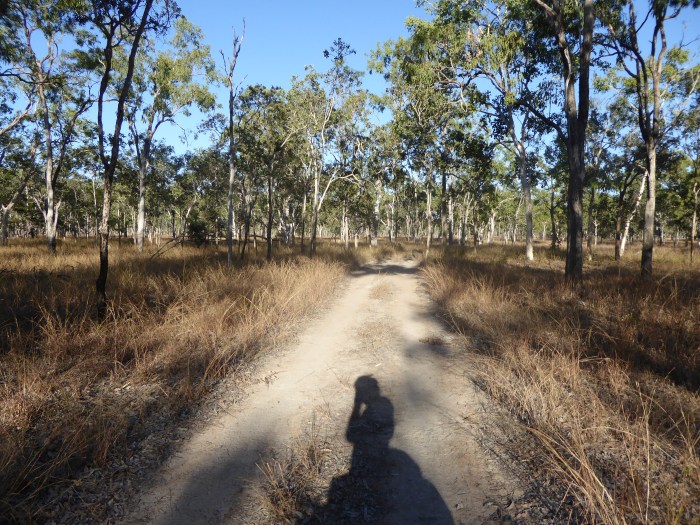 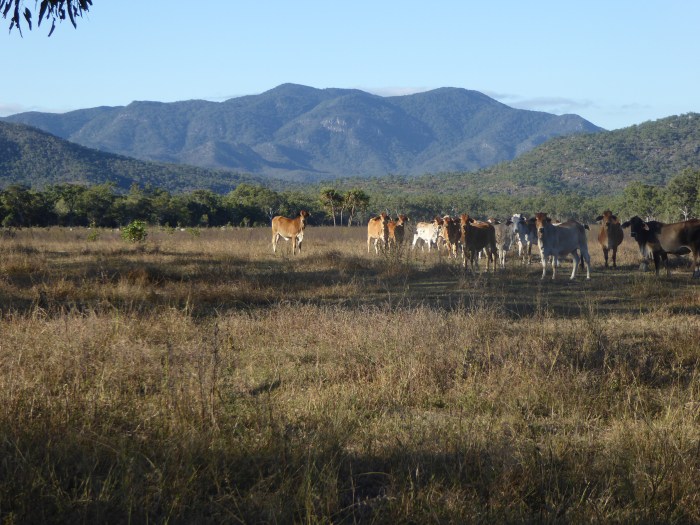 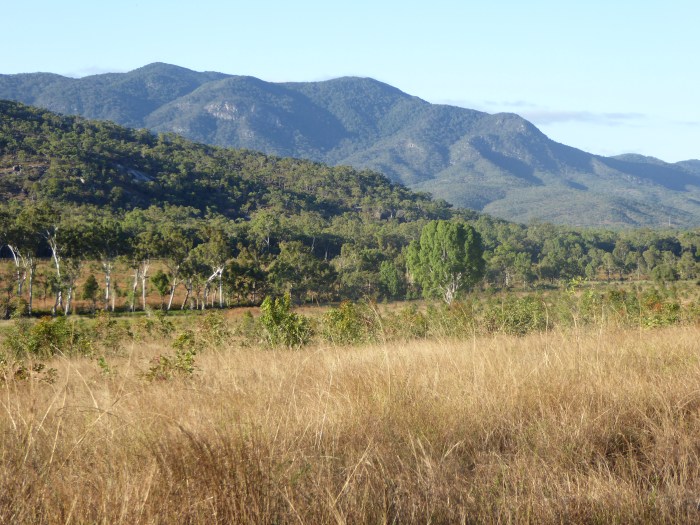 After leaving the station, I’m on my way to Mt Molloy on a gravel road. It’s not so flat anymore and I’m running out of energy. I keep on eating to try to keep myself going.
The sun goes down just before I hit the main road. 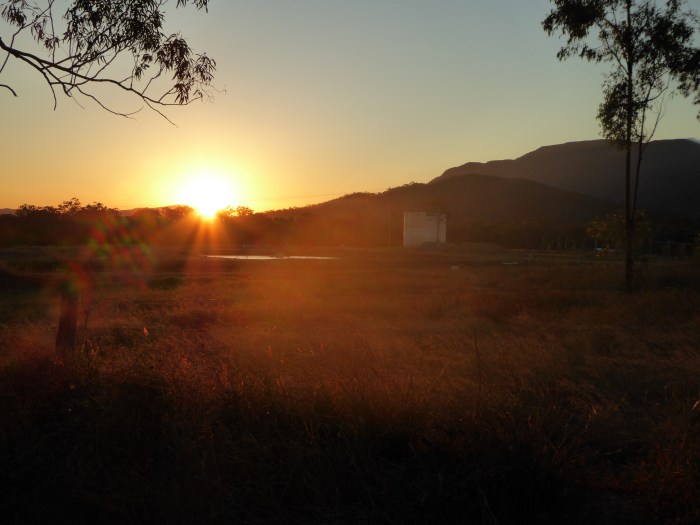 I’m in Mt Molloy and my notes tells me there is a free campsite a few kilometres away. I make it to the campsite just as it gets dark. It’s crowded here, packed with caravans, backpackers and generators. I like company but this is a little too much.
After a cold shower, I am offered dinner and a beer, a kind gesture that saves me some time cooking. I was so hungry. I hope my backpacker neighbours are going to keep quiet tonight. I really need some sleep after 70km on very difficult tracks and bush bashing.